The Largest Pink Diamond Ever Found in Australia

Diamonds, famous, News 2:56 PM
A+ A-
Print Email
The huge rough stone, found by the resources giant Rio Tinto at its Argyle mine in the Kimberley region, has been named the Argyle Pink Jubilee and is worth at least £7 million. The Argyle Pink Jubilee will be polished and cut in Perth over the next ten days and then sold later this year after being shown around the world.

It is a light pink diamond, similar in colour to the 24-carat diamond The Williamson Pink, which Queen Elizabeth II had set into a Cartier brooch for her coronation after receiving it as a wedding gift. The Williamson was discovered in Tanzania in 1947 and is ranked among the finest pink diamonds in existence. 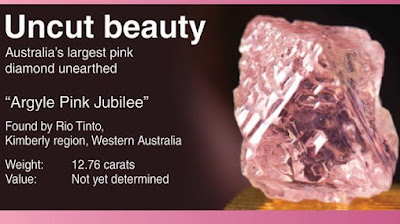 A Rio Tinto spokesman said 90 per cent of the pink diamonds in the world come from the Argyle mine but the new gem was "unprecedented".

"It has taken 26 years of Argyle production to unearth this stone and we may never see one like this again," said the spokesperson.

In 2010, a rare 24.78-carat pink diamond was sold for a record-breaking £29 million, the highest price ever paid for a jewel. It was sold to a British dealer at an auction in Geneva after being held in a private collection for 60 years.

Rio Tinto said extremely high quality pink diamonds could fetch in excess of US$1 million per carat, adding that Christie's has only auctioned 18 polished pink diamonds larger than 10 carats in its 244-year history.

The diamond cutting process
10 Most Rare Gemstones in the World Rarer than a Diamond
Share to: