Diamonds, gemstones, Mineralogy 9:54 PM
A+ A-
Print Email
Diamond cutting is the practice of changing a diamond from a rough stone into a faceted gem. Cutting diamond requires specialized knowledge, tools, equipment, and techniques because of its extreme difficulty.


Diamond manufacturers analyze diamond rough from an economic perspective, with two objectives steering decisions made about how a faceted diamond will be cut. The first objective is that of maximum return on investment for the piece of diamond rough. The second is how quickly the finished diamond can be sold. Scanning devices are used to get a 3-dimensional computer model of the rough stone. Also, inclusions are photographed and placed on the 3D model, which is then used to find an optimal way to cut the stone.

The process of maximizing the value of finished diamonds, from a rough diamond into a polished gemstone, is both an art and a science. The choice of cut is influenced by many factors. Market factors include the exponential increase in value of diamonds as weight increases, referred to as weight retention, and the popularity of certain shapes amongst consumers. Physical factors include the original shape of the rough stone, and location of the inclusions and flaws to be eliminated.

The weight retention analysis studies the diamond rough to find the best combination of finished stones as it relates to per carat value. For instance, a 2.20 carat (440 mg) octahedron may produce (i) either two half carat (100 mg) diamonds whose combined value may be higher than that of (ii) a 0.80 carat (160 mg) diamond + 0.30 carat (60 mg) diamond that could be cut from the same rough diamond.

The round brilliant cut and square brilliant cuts are preferred when the crystal is an octahedron, as often two stones may be cut from one such crystal. Oddly shaped crystals, such as macles are more likely to be cut in a fancy cut—that is, a cut other than the round brilliant—which the particular crystal shape lends itself to.

Even with modern techniques, the cutting and polishing of a diamond crystal always results in a dramatic loss of weight, about 50%. Sometimes the cutters compromise and accept lesser proportions and symmetry in order to avoid inclusions or to preserve the weight. Since the per-carat price of a diamond shifts around key milestones (such as 1.00 carat), many one-carat (200 mg) diamonds are the result of compromising Cut quality for Carat weight. 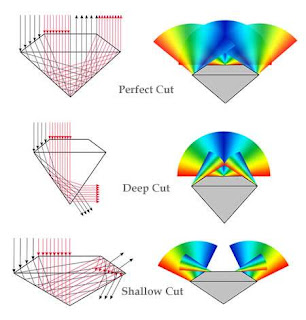 In colored diamonds, cutting can influence the color grade of the diamond, thereby raising its value. Certain cut shapes are used to intensify the color of the diamond. The radiant cut is an example of this type of cut.

Natural green color diamonds most often have merely a surface coloration caused by natural irradiation, which does not extend through the stone. For this reason green diamonds are cut with significant portions of the original rough diamond's surface (naturals) left on the finished gem. It is these naturals that provide the color to the diamond.

The other consideration of diamond planning is how quickly a diamond will sell. This consideration is often unique to the type of manufacturer. While a certain cutting plan may yield a better value, a different plan may yield diamonds that will sell sooner, providing an earlier return on the investment.

Cleaving is the separation of a piece of diamond rough into separate pieces, to be finished as separate gems.

Sawing is the use of a diamond saw or laser to cut the diamond rough into separate pieces.

Bruting is the process whereby two diamonds are set onto spinning axles turning in opposite directions, which are then set to grind against each other to shape each diamond into a round shape. This can also be known as girdling.

Polishing is the name given to process whereby the facets are cut onto the diamond and final polishing is performed. The process takes the steps blocking, faceting, also called "brillianteering", and polishing.
Final inspection

It is possible only because the hardness of diamond varies widely according to the direction in which one is trying to cut or grind.

A simplified round brilliant cut process includes the following stages:


This is just one, although a fairly common way of creating a round brilliant cut. The actual process also includes many more stages depending on the size and quality of the rough stone. For example, bigger stones are first scanned to get the three-dimensional shape, which is then used to find the optimal usage. The scanning may be repeated after each stage and bruting may be done in several steps, each bringing the girdle closer to the final shape.


See also:
Garnet Group: The Colors and Varieties of Garnet
How Does a Trapiche Emerald Form?
What Is Petoskey Stone, and Where Can You Find It?