How Ore Deposits Are Formed?

New computer simulations by geologists from ETH Zurich demonstrate how large copper and gold deposits are formed. The enrichment process of these metals follows physical principles that are similar to the extraction of deep geothermal energy by hydraulic fracturing of the rock.

Porphyry-type ore deposits rank among the world’s most important sources of copper, molybdenum and gold. They meet around three quarters of today’s global copper demand and are thus of extreme economic importance. Finding new ore deposits in the Earth’s crust depends on our understanding how nature forms such gigantic metal accumulations that can be exploited at reasonable economic and environmental expense.

Until now, geologists have primarily studied these deposits using field observations and geochemical analyses, but were unable to fully understand the physical processes of ore formation. Using a computer model that simulates these dynamic processes, Philipp Weis, Thomas Driesner and Christoph Heinrich at the Institute of Geochemistry and Petrology of ETH Zurich have now found a clear answer to this question.

The deposits form above the roof of a magma chamber that lies beneath an active volcano. As the magma crystallises into granitic rock in the subsurface, metal- and salt-rich aqueous solutions are expelled from the chamber. These fluids make their way up through the volcanic vent, which has already solidified into porphyritic rock. At a certain height, the metals precipitate from the ascending fluids. The ore deposit has a typical, well-defined shape that resembles the cap of a mushroom. Its “stem” is the volcanic vent, which has solidified into porphyry and then cracked to form numerous veins through which the fluid pushed its way upwards.

With their numerical simulations, the researchers can now demonstrate which physical processes have to work together for the metals to accumulate. “The beauty of this model is that the volcanic system spontaneously organises itself in such a way that the metals accumulate locally until they reach the ore content observed in nature and are not scattered over the entire crustal depth from the magma chamber to the surface.

The latter would never produce a mineable ore deposit,” says the first author of the Science study Philipp Weis. Using their model developed at the ETH-Zurich over many years, the researchers can now explain all the key information collected from geological field studies and chemical measurements.


All down to temperature and pressure

The most important factors that determine ore deposition are the temperature and pressure of the fluid. If they drop, the solubility of the metals decreases. Moreover, the two factors also influence how brittle the rock is, which in turn governs the formation of veins and its permeability.

Strong excess fluid pressures are required for vein formation in the host rock above the magma chamber and for the mineral- and salt-containing solutions to be pushed upwards through the rock as if through a sieve. However, because the hot fluids heat up the rock, it becomes ductile, which means it deforms in a plastic manner and becomes harder to break. As a result, the sieve’s mesh closes up.


At the same time, colder groundwater circulating in the Earth’s crust cools the system from the outside. As a consequence, a cylindrical ascent zone dominated by magmatic fluids forms above the magma chamber. Along a sharp boundary layer, this zone merges into a cooler area where surface water circulates. There, the rock is brittle and thus breaks more easily than deeper down.

This transition is crucial: here, the pressure and temperature change abruptly and drop dramatically in the space of 200 metres. As a result, the mechanical sieve becomes a chemical sieve where the ascending fluid drops its entire cargo of metals.

It takes around 50,000 years for the magma chamber to expel its fluid. During this period, the precipitation zone hardly shifts, enabling a substantial amount of copper to accumulate about two kilometres beneath the Earth’s surface.


Interaction between rock and fluid 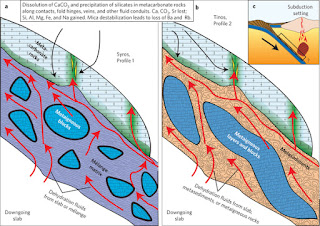 “This interaction between rock behaviour and fluid dynamics is crucial for our model because the permeability of the rock strongly influences fluid flow and thus determines whether there will be a chemical enrichment to substantial economic ore grades at a particular point,” Weis stresses.

However, the significance of the model goes beyond the formation of ore deposits. The water pressed into the subsurface to exploit geothermal energy is also governed by similar principles – albeit the other way round.

In the crystalline subsurface, water injected artificially into a deep borehole exerts high pressure on the surrounding rock and changes its permeability. After fracturing the rock, water can flow through and heat up before being collected at a second drillhole, to be transported back to the Earth’s surface. “This interplay between fluid and rock is comparable to the ore system, even if the different temperature and pressure conditions call for different material descriptions,” explains co-author Thomas Driesner.

He and a new doctoral student have now turned their attention to using the numerical model to tap into deep geothermics. The model is particularly suitable for applications on geothermal energy because the feedbacks between mechanical and chemical changes in the rock and the flow of water are essential.

In practice, the key to efficient extraction of deep geothermal energy is to create a rock permeability that is high enough but not too high. If the water is allowed to flow through the fractured rock too fast, it cannot heat up sufficiently. On the other hand, if cracks and pores in the rock are too small, the flow is weak and ineffective for energy extraction.

“There is still a lot of research needed until deep geothermal systems can be controlled”, Philipp Weis says. Because it is difficult and costly to capture these processes in the deep subsurface by direct observations, numerical models are indispensable tools to gain new scientific insights and to eventually assist energy producers.