Dinosaur die-off not a result of volcanoes, new study says 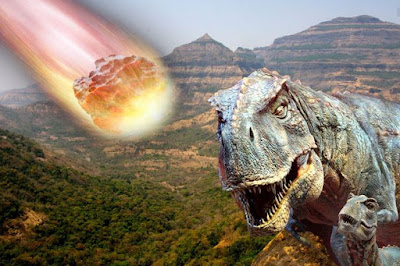 A new study suggests that volcanic eruptions did not lead to the extinction of the dinosaurs, and also demonstrates that Earth's oceans are capable of absorbing large amounts of carbon dioxide—provided it is released gradually over an extremely long time.

Scientists have long argued over the cause of the Cretaceous-Palaeogene extinction event, during which three-quarters of all plant and animal species, including the dinosaurs, went extinct roughly 65 million years ago. Most researchers favor the idea that a catastrophic, sudden mechanism such as an asteroid hit triggered the mass die-off, while others say a gradual rise in CO2 emissions from volcanoes in what is now India may have been the cause.

Scientists at Yale and in the United Kingdom say they may have a more definitive answer.

"One way that has been suggested that volcanism could have caused extinction is by ocean acidification, where the ocean absorbs CO2 and becomes more acidic as a result, just as it is doing today with fossil fuel-derived CO2," said Michael Henehan, a postdoctoral associate at Yale and lead author of a study appearing April 25 in the journal Philosophical Transactions of the Royal Society B.

"What we wanted to do was gather all the evidence that's been collected from ocean sediments from this time and add a few new records of our own, and consider what evidence there is for ocean acidification at this time," Henehan said.

Henehan and his colleagues analyzed sediments from the deep sea, looking for signs of dissolution that would indicate more acidic oceans. The researchers found that the onset of volcanism did cause a brief ocean acidification event. Critically, though, the pH drop caused by CO2 release was effectively neutralized well before the mass extinction event.

"Combining this with temperature observations that others have made about this time, we think there is a conclusive case that although Deccan volcanism caused a short-lived global warming event and some ocean acidification, the effects were cancelled out by natural carbon cycling processes long before the mass extinction that killed the dinosaurs," Henehan said.

This is not to say that CO2 released by volcanoes did not prompt climate effects, the researchers noted: Rather, the gases were released over such a long timescale their effect could not have caused a sudden, species die-off.

The study also has implications for understanding modern climate change, the researchers noted. They said it adds to an increasing body of work that suggests restricting CO2 release to much slower and lower levels over thousands of years can allow the oceans to adapt and avoid the worst possible consequences of ocean acidification.

"However, if you cause big disturbances over rapid timescales, closer to the timescales of current human, post-industrial CO2 release, you can produce not only big changes in oceanic ecosystems, but also profound and long-lasting changes in the way the ocean stores and regulates CO2," Henehan said.

The researchers said their work also suggests that disruption of marine ecosystems can have profound effects on Earth's climate.

"The direct effects of an asteroid impact, like massive tsunamis or widespread fires, would have lasted only for a relatively short time," said co-author Donald Penman, a postdoctoral associate at Yale. "However, the loss of ecologically important groups of organisms following impact caused changes to the global carbon cycle that took millions of years to recover. This could be seen as a warning for our future: We need to be careful not to drive key functional organisms to extinction, or we could be feeling the effects for a very long time."

Journal reference: Philosophical Transactions of the Royal Society B
Provided by: Yale University
Share to: