When life returned after a volcanic mass extinction 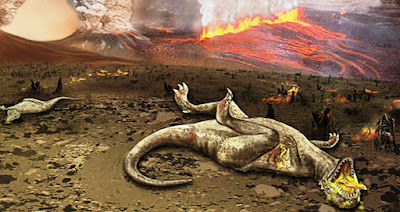 A worldwide mass extinction 201.5 million years ago wiped out 60 percent of sea life, including coral reefs and shelled marine animals. On land, the dead included many plants as well as giant reptiles that competed with the earliest dinosaurs.

The mass extinction apparently was caused by huge carbon dioxide emissions from gargantuan volcanic eruptions in the center of the supercontinent Pangea, which eventually broke into today's modern continents. The eruptions were in what is named the Central Atlantic Magmatic Province because the Atlantic Ocean eventually formed there as Pangea broke apart.

In the April 6 issue of the journal Nature Communications, a new study used fossils and mercury isotopes from volcanic gas deposited in ancient proto-Pacific Ocean sediment deposits in Nevada to determine when life recovered following the mass extinction at the end of the Triassic Period. The Proto-Pacific surrounded Pangea.

Kathleen Ritterbush, an assistant professor of geology and geophysics at the University of Utah, co-authored the study. It found a significant recovery of sea life didn't occur until after the end of the massive volcanic eruptions, which occurred in spurts between 201.6 million and 200.9 million years ago.

While colleagues did the mercury analysis, Ritterbush collected rocks and analyzed ancient sea sponges. Traces of mercury in rock showed the timing of major lava eruptions as Pangea split.

Although squid-like ammonites diversified rapidly when eruptions ceased, seafloor ecology recovered slowly. Sponges carpeted coastal habitats for about 2 million years before mollusks and corals finally re-established ecosystems as complex as before the eruptions.