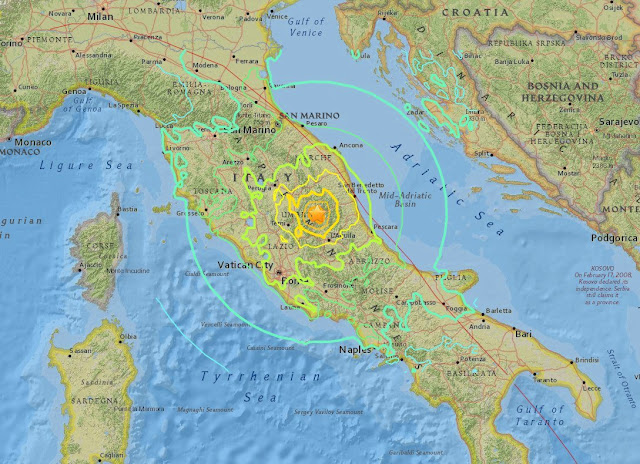 A magnitude 6.2 earthquake has struck central Italy, leaving at least 37 people dead and 150 missing, as rescuers search for survivors.

Many of the dead were in the village of Pescara del Tronto which was levelled to the ground and there were fears the number of casualties could rise.

Much of the town of Amatrice was reduced to rubble and a family of four were feared dead nearby in Accumoli.

Although it struck at a shallow depth of 10km, its intensity was compared to the Aquila earthquake in April 2009 in which 309 people died. The epicentre was around

Some buildings in the capital shook for 20 seconds as the quake struck the regional border area of Umbria, Lazio and Le Marche. It was felt from Bologna in the north to Naples in the south. Some 80 aftershocks have been reported since.


Local authorities were unsure of the full extent of casualties, but 11 people were reported dead including children in the neighbouring villages of Pescara del Tronto and Arquata del Tronto. An elderly couple and a boy were among the victims.

Another 20 people have been taken to hospital. Two boys aged four and seven were pulled alive from the rubble of the house they had been staying in with their grandmother, Ansa news agency reported. Rescuers said they had been sheltering under a bed.

Rescuers were still trying to reach the remote village of Peracchia di Acqua Santa Terme a few kilometres to the east.


Some of the worst damage was in the town of Amatrice, where at least five died and rescue efforts were under way to find survivors.

"The roads in and out of town are cut off. Half the town is gone. There are people under the rubble. There's been a landslide and a bridge might collapse," said mayor Sergio Pirozzi.

"There are tens of victims, so many under the rubble. We're preparing a place for the bodies," he said.