Meteorites are pretty common on the Red Planet due to its thin atmosphere and proximity to the asteroid belt. But this little meteorite is unusually smooth - almost like someone's buffed it.

It also has several deep grooves, which suggests that it might have been molten at some point in time.

Nicknamed the 'Egg Rock' because of its smoothness, Curiosity was able to take a close enough image of the structure for NASA scientists to analyse its composition.
For now, they think the meteorite is most likely made of nickel-iron, and came from the core of a structure in the asteroid belt. Objects in the asteroid belt are often sent smashing into Mars after being kicked out by Jupiter's gravity.


Based on its appearance, it's likely the metallic meteorite became molten as it entered Mars' atmosphere, before hardening once it reached the surface - which could explain both the smoothness and some of the strange grooves that suggest the effects of weathering.

You can get a better look at the meteorite, which is only 4 cm (1.6 inches) wide, in this close-up taken by Curiosity's ChemCam Remote Micro-Imager: 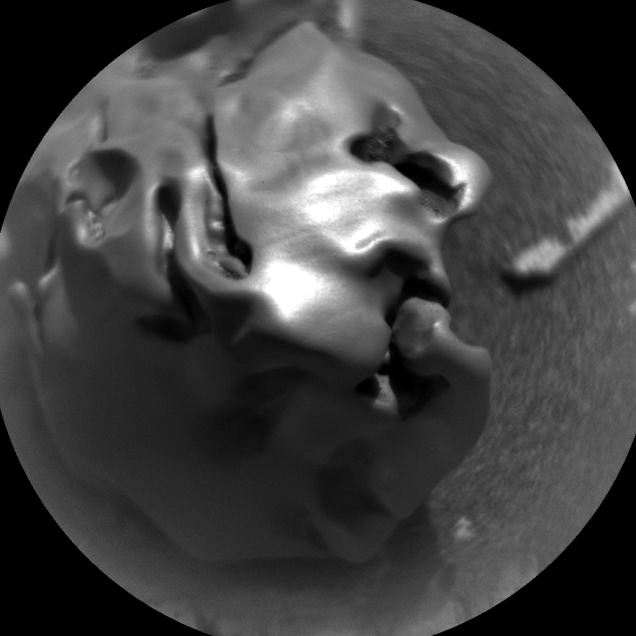 Finding meteorites on the Red Planet might not be a rare occurrence, but it's always exciting for researchers, seeing as many of the rocks that land on the surface of Mars wouldn't make it through Earth's atmosphere.

That gives us the chance to study chunks of the Solar System we wouldn't otherwise come across - and it could help scientists to explain more about the objects in the asteroid belt, as well as conditions on the Red Planet.

Mars also has less oxidation and weather erosion compared to Earth, so the meteorites on its surface are in a better condition than any that do make it through our thick atmosphere.

Curiosity is now roving around the base of Mount Sharp, and continuing to look for evidence that the area might have once been habitable.

We've already detected evidence of liquid flowing water on the surface of the Red Planet, and research suggests that the Gale Crater, where Curiosity landed, might have once been a giant lake.

But since our favourite little rover is banned from directly investigating any sources of liquid water, for now it's giving us a better understanding of the habitability of the Red Planet by analysing soil and rock samples, and providing high-res images of the alien environment.