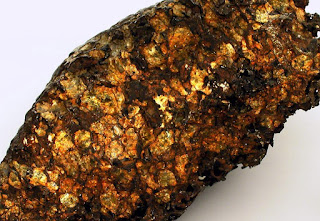 Scientists Find a Quasicrystal from Outer Space in a Russian Meteorite

Physicists have uncovered an ultra-rare quasicrystal in a piece of Russian meteorite, and it’s only the third time ever that we’ve seen one of these strange materials in nature.

There’s more than one way to cook a quasicrystal. For the first time, a new kind of this weird, rule-breaking solid has been found in nature without an identical compound having first been made in the lab.

Paul Steinhardt at Princeton University has doggedly hunted for quasicrystals since he predicted their existence in the early 1980s. Before then, we only knew of two types of solids: crystals, in which every atom is arranged neatly in a repeating lattice, and amorphous solids, which have no such order. Quasicrystals are almost crystals, but they break the rules: their neat patterns never exactly repeat.

The first synthetic quasicrystal was grown in the lab in 1982, and there are now more than 100 types of lab-grown ones. But this is only the third type found in nature – all three from the Khatyrka meteorite from north-eastern Russia since 2009. The approximate composition of the first two had been created in a lab beforehand.

Finding a fresh example in nature allows us to continue writing a recipe for creating new quasicrystals from scratch, says Steinhardt. For one thing, all three seem to require metallic aluminium, which naturally bonds to oxygen except in this meteorite.

The new quasicrystal has a similar molecular structure to the first one, but slightly different chemistry: both are made of aluminium, copper and iron, but in different proportions. Steinhardt and his team had collected samples of the Khatyrka meteorite in 2011, and found the new material in a chip less than half a millimetre across.

“It’s hard to look systematically for these things, because we’re talking about grains which are typically tens, or maybe a few hundred microns, in size, and you have to look through a gigantic meteorite at each little grain that size,” says Steinhardt. “Unless you were completely crazy like we were, you wouldn’t be doing that.”

Steinhardt and his collaborators hope that this discovery will lead to further systematic searches. Now that we know we can find novel quasicrystals in nature, it might be worth the effort.

Violent impact?
In looking to nature, Steinhardt aimed to learn more about how quasicrystals form. Based on the structure and melt patterns in the Khatyrka meteorite, he and his team believe that the quasicrystals formed through some sort of violent impact in space, such as a collision between two asteroids. Studying the natural quasicrystals and the meteorite they came from in detail could teach us about the environment in the early solar system that led to their existence.

Finding new quasicrystals in nature could also pave the way towards fresh methods for producing them in the lab. With the composition of this new quasicrystal in hand, it should be easy to synthesise it. “Once you know the answer, it’s not that hard to reproduce,” says Steinhardt.

But as with the other quasicrystals, nobody is quite sure what it could be used for. Steinhardt has a quasicrystal-coated frying pan that takes advantage of their hard, slippery nature in a corner of his office, but no other practical applications have been found yet.

Part of the point of looking for new quasicrystals is “to find new quasicrystalline alloys that might have some use, because none of the ones discovered so far really have any use other than ‘wow, this is cool’ ”, says Paul Asimow at the California Institute of Technology, who helped study the origin of these materials. “But it’s not out of the question that someone will find a really good use for quasicrystals one of these days.”


The research has been described in Scientific Reports.
Share to: