Swimming through an area of extreme natural beauty, this diver surveys the underwater canyons on his either side.

But this British scuba diver is actually between two tectonic plates.

Alex Mustard, 36, dived 80ft into the crevice between the North American and Eurasian plates near Iceland to capture these spectacular photos.

The area is riddled with faults, valleys, volcanoes and hot springs, caused by the plates pulling apart at about one inch per year.

Mr Mustard snapped away as he and his dive partners swam through fresh water canyons Silfra, Nes and Nikulasargja, which are up to 200ft deep.

He also took photos of the Arnarnes Strytur chimney, which forms a cloudy plume as 80C water is ejected from Earth's crust and hits the cool 4C seawater.

Mr Mustard, from Southampton, said: 'The photos show diving in the unique underwater world of Iceland which, like on land, is formed by the volcanic landscape of the country. 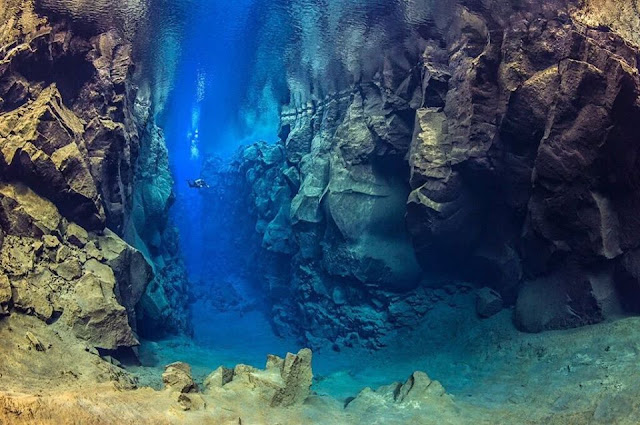