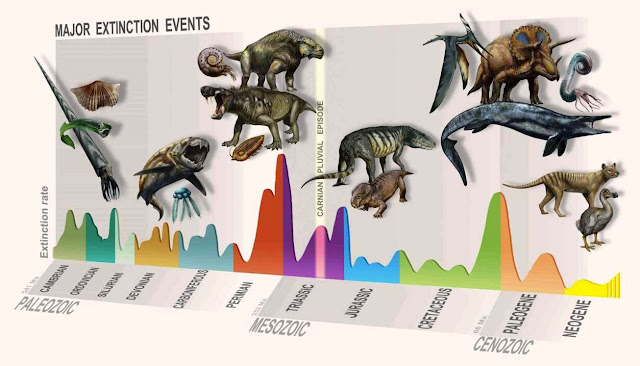 Most scientists agree that a "mass extinction" event is underway with the Earth's wildlife disappearing at an alarming rate, mainly due to human activity. Scientists warn overpopulation, overconsumption by the wealthiest and assaults on biodiversity are pushing Earth to its limit quicker than ever before.

But this is not the first time: over the last half-billion years there have been five major wipeouts in which well over half of living creatures disappeared within a geological blink of the eye. All told, more than 90 percent of organisms that have ever strode, swam, soared or slithered on Earth are now gone.

Here are the biggest die-offs, each showing up in the fossil record at the boundary between two geological periods:

When: about 445 million years ago
Species lost: 60-70 percent
Likely cause: Short but intense ice age

Most life at this time was in the oceans. It is thought that the rapid, planet-wide formation of glaciers froze much of the world's water, causing sea levels to fall sharply. Marine organisms such as sponges and algae, along with primitive snails, clams, cephalopods and jawless fish called ostracoderms, all suffered as a consequence.

When: about 375-360 million years ago
Species lost: up to 75 percent
Likely cause: oxygen depletion in the ocean

Again, ocean organisms were hardest hit. Fluctuations in sea level, climate change, and asteroid strikes are all suspects. One theory holds that the massive expansion of plant life on land released compounds that caused oxygen depletion in shallow waters. Armoured, bottom-dwelling marine creatures called trilobites were among the many victims, though some species survived.

The mother of all extinctions, the "Great Dying" devastated ocean and land life alike, and is the only event to have nearly wiped out insects as well. Some scientists say the die-off occurred over millions of years, while others argue it was highly concentrated in a 200,000-year period.

In the sea, trilobites that had survived the last two wipeouts finally succumbed, along with some sharks and bony fishes. On land, massive reptiles known as moschops met their demise. Asteroid impacts, methane release and sea level fluctuations have all been blamed.

The end of archosaurs "Triassic extinction"

The mysterious Triassic die-out eliminated a vast menagerie of large land animals, including most archosaurs, a diverse group that gave rise to dinosaurs, and whose living relatives today are birds and crocodiles. Most big amphibians were also eliminated.

One theory points to massive lava eruptions during the breakup of the super-continent Pangea, which might have released huge amounts of carbon dioxide, causing runaway global warming. Other scientists suspect asteroid strikes are to blame, but matching craters have yet to be found.

When: about 66 million years ago
Species lost: 75 percent
Likely cause: asteroid strike

An space rock impact is Suspect No. 1 for the extinction event that wiped out the world's non-avian dinosaurs, from T-Rex to the three-horned Triceratops. A huge crater off Mexico's Yucatan Peninsula supports the asteroid hypothesis.

But most mammals, turtles, crocodiles and frogs survived, along with birds as well as most sea life, including sharks, starfish and sea urchins. With dinosaurs out of the way, mammals flourished, eventually giving rise to the species -- Homo sapiens -- that has sparked the sixth mass extinction. 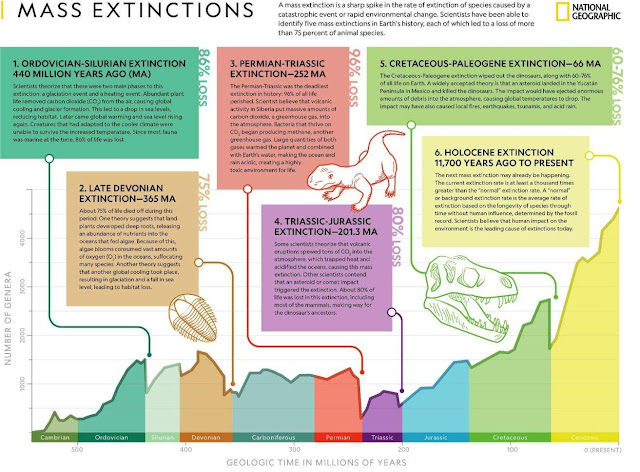