The Largest and Most Significant Black Gem 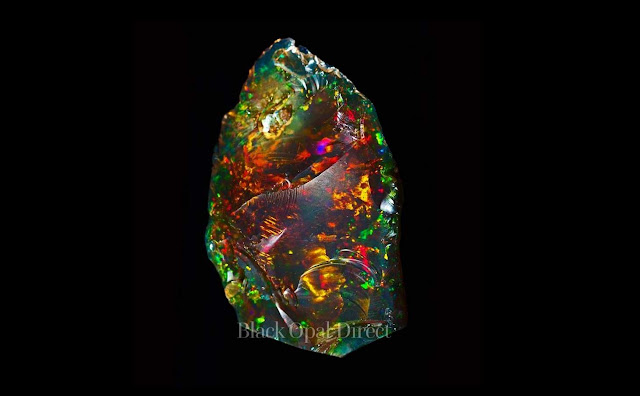 A mammoth 568 carats “The Eternal Flame” is the largest and most significant black gem ever found. What makes it even rarer is its origin. The volcanic soils of coastal New South Wales, Australia are replete with bands of obsidian and quartz but only small finds of volcanic opal – nothing like the great inland fields of Lightning Ridge, Coober Pedy and Queensland.

Full of fire and wonder it glows like a prehistoric magic flame and harks back to a time when the earth was undergoing massive geological upheaval. The colour is unflinching and majestic, daring you to find an inferior angle. It holds a power that is bewitching.

The volcanic region of eastern Australia created the most unusual of all Australian opals. Tintenbar crystal is volcanic and ethereal. The opal fire is soft and gem edges are water worn, indicating an alluvial nature. The pieces found are usually small under 10 carats. They are collectors oddities for the most part.

By contrast “The Eternal Flame” is so named for the fire which burns bright within.  A large piece of black crystal opal it rivals the best of any found on the fields of Lightning Ridge. Stored dry in a vault, forgotten for over 40 years, the opal remains in pristine condition with no water wear. Opal experts including us have never seen anything like it and could not conceive of such an opal existing.


The above story is based on materials provided by Black Opal Direct.
Share to: