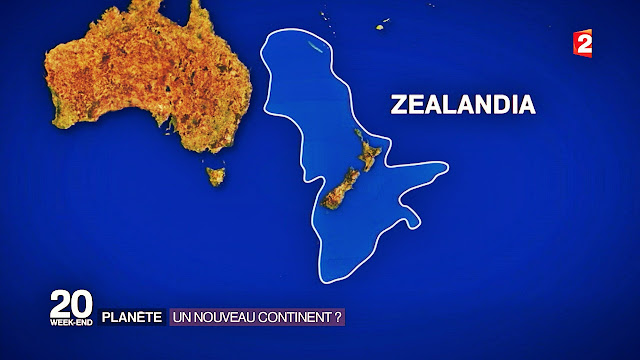 Zealandia made global headlines earlier this year when scientists announced that it counts as a new continent.

Now it is coming under closer scientific scrutiny. We are currently halfway through an expedition to drill into this vast underwater plateau of continental crust, and we can already reveal that Zealandia’s geography changed more dramatically and more recently than anyone had thought.

There are seven continents on Earth: Eurasia, North America, South America, Africa, Antarctica, Australia and now Zealandia. Zealandia is about two-thirds the size of Australia, but 94% of it lies deep below the southwest Pacific Ocean. Its only major landmasses are New Zealand to the south and New Caledonia to the north.

Very little is known about it, because most of it lies more than a kilometre deep beneath the Pacific Ocean. The Zealandia continent also encompasses some smaller bits of land, including Norfolk Island, the Lord Howe group and some sub-antarctic islands. These islands were discovered hundreds of years ago, but the submerged part was only recognised as a continent in recent decades. It remains sparsely surveyed and sampled. We have better maps of the moon.

We are a team of 32 scientists from 12 different countries and our expedition is part of the International Ocean Discovery Program, which coordinates seagoing explorations of Earth’s history recorded in sediments and rocks beneath the ocean floor. Our ship, the Joides Resolution is a floating village and laboratory, equipped with a drill rig that can take core samples from the seafloor. The samples we have collected so far show clear signs of major geographic changes and volcanic eruptions that were related to formation of the Pacific Ring of Fire, a chain of undersea volcanoes, ocean trenches, seamounts and hydrothermal vents that formed some 40 to 50 million years ago.

There is a buzz of excitement on the ship. After more than a month at sea we are mid-way through our expedition and have drilled into the seabed at four sites. You can’t beat the old-fashioned thrill of exploration and discovery. We are re-writing the geological history of Zealandia on our voyage. Zealandia was first recognised about 50 years ago and ideas for how it formed were published then, but the only previous expedition that has drilled deep enough into the seabed to collect useful evidence was undertaken in 1971.

It appeared back then that Zealandia separated from Australia and Antarctica about 80 million years ago, when dinosaurs roamed the Earth. It then subsided deep beneath the waves and was lost. However, fossils and volcanic rocks show that northern Zealandia, an area about the size of India, was radically affected by formation of the Pacific Ring of Fire.

Our preliminary observations suggest that regions now under more than 1000 metres of water became land or shallow seas, and other regions that are now under 3000 metres of water may have been much shallower, or even land. Changes in geography were massive, and may help explain how the unique plants and animals of the southwest Pacific were able to disperse and evolve.

Explorers are normal people doing extraordinary things. Exploration isn’t easy. Not everything goes to plan. The hours are long, you share a small room with someone you didn’t know before the voyage, and you miss your family and friends. Sea sickness is not your friend if you spend 14 hours a day looking down a microscope at fossils that are so small you could fit hundreds on the head of a pin. So why do we do it?

It is hard to describe the excitement of discovery. Every time we get a new core on deck it is like unwrapping a present. What will it be? A curiosity to keep you busy for another few days, or key evidence to reconstruct the history of a hidden continent? Our goals are to understand why Earth’s surface moves (the study of plate tectonics) and how greenhouse climate systems work (climate change). The southwest Pacific location makes Zealandia ideal for testing ideas on how the earth works.

The formation of the Pacific Ring of Fire changed the way our planet moved: new volcanoes and mountains grew, natural resources formed, and the changes had long-term effects on global climate. Zealandia was closer to the South Pole 50 million years ago, but had a warm climate. How was this possible? If computer models can’t predict such warm conditions in the past, could models of future global warming also be underestimates?

The answers to these and many more questions lie beneath the waves, recorded in sediment layers that have accumulated over millions of years.