Are Earth's Magnetic Poles About To Flip? 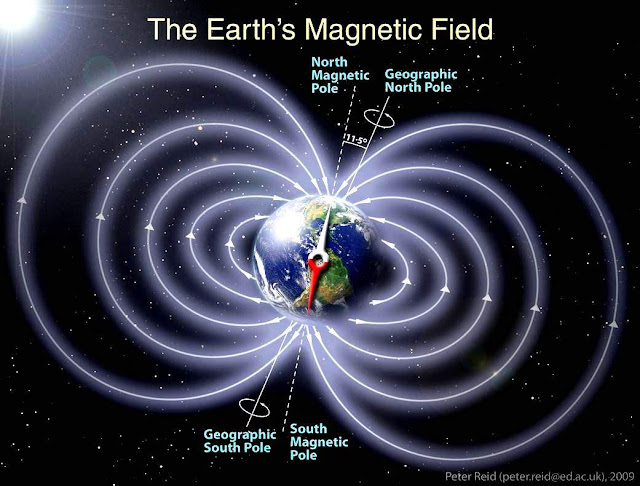 Throughout its history, Earth’s magnetic poles have flipped regularly. The last time this occurred was around 786,000 years ago, and judging from the paleomagnetic data which researchers studied, we’re in for a new pole reversal soon. According to scientists operating the European Space Agency’s (ESA) Swarm trio, clusters of molten iron and nickel are ‘on the run’, draining the dipole. There’s a revolution shaping up, and if precautions aren’t taken, the consequences could be dire for modern human civilization.


What is a geomagnetic reversal?

If geologic history repeats itself, Earth’s magnetic poles should eventually swap places. This much is undeniable. Based on the magnetic fingerprints locked into ancient rocks, we know that over the last 20 million years, magnetic north and south have flipped roughly every 200,000 to 300,000 years (this rate has not been constant over the planet’s lifetime, though). The last of these major reversals occurred about 780,000 years ago, although the Poles do wander around in between these larger flips.

That means we’re a bit overdue for a total reversal, and some data do, in fact, suggest that a geomagnetic reversal is geologically imminent. But this does not mean a polar flip-flop is going to happen tomorrow, or even any time soon, and we’d put good money on North still being in the Arctic for a while—although neither we nor anyone else knows when the next total reversal will actually happen.


If it happens soon, won’t that be bad?

Also unclear. Scientists estimate that past polar flips have been rather sluggish, with north and south migrating to opposite positions over thousands of years. This is both good and bad if you’re concerned about how a geomagnetic reversal will affect life on Earth.

The sluggish polar meander is good, because it means we have time to prepare and can do our best to ameliorate any unpleasant effects before they get really unpleasant. But it’s bad, because our planet’s magnetic field helps shield us from damaging solar and cosmic radiation, and a protracted flip means Earth might be slightly less protected from harmful space rays for longer than we would like.

It’s also not very dramatic, because it means you won’t suddenly wake up and find out that your smartphone thinks Santa’s workshop is in the Southern Hemisphere.


What will we actually notice?

The only major, noticeable effect that’s guaranteed to occur when the polar flop is finished is that your compass needle will tell you that North is in Antarctica and South is somewhere near Canada. This will make the names of the American continents temporarily confusing (at least, on a geologic time scale) but it’ll make for a good story in classrooms.

Another interesting consequence will be that animals that use Earth’s magnetic field for navigation—including birds, salmon, and sea turtles—could get lost during their routine journeys. Eventually they will sort this out, and all other things being equal, life will go on. Lots of doomsday prophets have tried to equate geomagnetic flips with mass extinctions, but the data just aren’t there.

It’s true that when the poles do reverse, Earth’s magnetic field could get weaker—but its strength is already quite variable, so that’s not necessarily unusual, and there’s no indication it will vanish entirely, according to NASA. Why? Because it never has.

However, if the magnetic field gets substantially weaker and stays that way for an appreciable amount of time Earth will be less protected from the oodles of high-energy particles that are constantly flying around in space. This means that everything on the planet will be exposed to higher levels of radiation, which over time could produce an increase in diseases like cancer, as well as harm delicate spacecraft and power grids on Earth.

These are consequences we can prepare for, and as far as everything below the stratosphere goes, we’ll have a nice, thick atmosphere that can also help act as a shield.

For now, we’re doing a decent job of introducing carcinogenic toxins to the environment and otherwise altering the ways in which ecosystems normally function, so there are bigger things to worry about in the short term.

That being said, one total bonus of having a weaker magnetic field is that auroras will be visible from much lower latitudes, so the nighttime skies will be even more epic.


The above story is based on materials provided by National Geographic.
Share to: