The Biggest Landslides on Earth Caused by Very Tiny Organisms 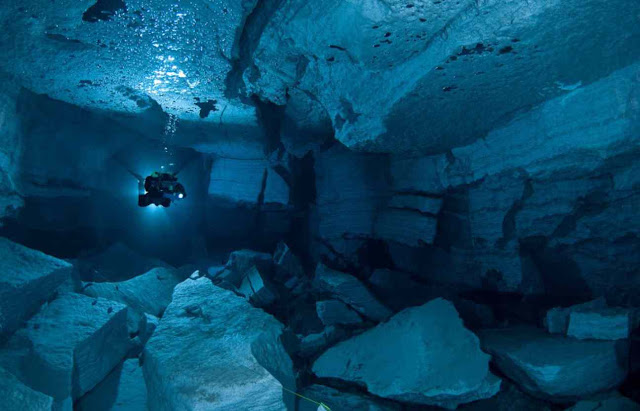 The biggest landslides on Earth aren't on land, but on the seafloor. These mega-slides can move thousands of cubic kilometers of material, and sometimes trigger tsunamis. Yet, remarkably, they occur on nearly flat slopes of less than three degrees.

Morelia Urlaub, a marine geoscientist at the Geomar Helmholtz Center for Ocean Research in Kiel, Germany, voices the obvious question: "How can you fail on a slope that is so flat?" Now, Urlaub and colleagues may have discovered the answer. The smoking -- or in this case, oozing -- gun is a layer of siliceous microfossils called diatoms.

The study, published online ahead of print for the Geological Society of America's journal Geology, is the first to identify the weak layer responsible for a submarine mega-slide. Although the nature of these critical weak layers has been highly debated, studying them has been nearly impossible because they are typically destroyed along with the slides.

Urlaub was compiling ocean drilling data from 1980 when she realized that the core sampled the seafloor just outside the Cap Blanc slide, a 149,000 year-old mega-slide off the coast of northwest Africa. She correlated that data with high resolution seismic reflection data recorded in the same area in 2009.

Together, these data revealed diatom-rich layers, up to ten meters thick, that traced directly from the core to the base of slide layers within the mega-slide complex. What's more, each diatom layer was topped by a layer of clay-rich sediment.

That clay is apparently key. "Diatom layers are very compressible and water rich," Urlaub says. As pressure builds, she explains, water would be squeezed from the diatom layer into the clay. Ultimately the clay or the interface between the clay and diatoms fails, sending the sediments above sliding.

At the Cap Blanc slide, the seafloor slopes at just 2.8 degrees. Yet when it broke loose, the slide transported over 30 cubic kilometers of material, and extended at least 35 kilometers. Another submarine mega-slide 8,500 years ago off Norway moved a staggering 3,000 cubic kilometers, causing a damaging tsunami.

And some scientists speculate that the 2011 Tohoku tsunami in Japan may have been amplified by a submarine mega-slide. Although such slides don't occur very often, says Urlaub, their size makes them quite significant.

"One-fifth of all tsunamis may be caused by undersea mega-slides," she says. If diatom layers are a major factor, then understanding where paleoclimate conditions may have favored diatom growth might help reveal potential mega-slide sites.


The above story is based on Materials provided by Geological Society of America.
Share to: