Granite Vs Gabbro: Similarities and Differences 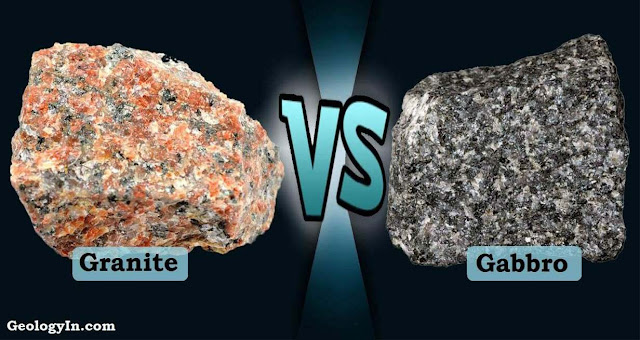 Granite is a medium-tocoarse-grained acid igneous rock with essential quartz (>20%) and feldspar, where alkali feldspar constitutes between 100 and 35% of the feldspars, and minor mafic minerals.
Gabbro is a dark, medium- to coarse-grained intrusive igneous rock composed of calcium plagioclase, pyroxene, and minor olivine, but no quartz.

Granite is a coarse-grained igneous rock with average grain size ranging from 1 to 25 millimeters.
Gabbro is generally coarse grained, with crystals in the size range of 1 mm or greater.

Gabbro in the strict sense of the term is an intrusive rock that is chiefly composed of monoclinic pyroxene and plagioclase.  if more than 90% plagioclase is present, then the rock is an anorthosite, if on the other hand, the rock contains more than 90% pyroxenes, it is termed pyroxenite. Gabbro may also contain small amounts of olivine (olivine gabbro) amphibole (hornblende gabbro) and biotite. Gabbroic rocks may contain small amounts of quartz (up to 5%). If there is more quartz present, the rock must be named quartz gabbro. If quartz makes up more than 20%, then the rock is one of granitoids.

Granite is a medium-tocoarse-grained acid igneous rock with essential quartz (>20%) and feldspar, where alkali feldspar constitutes between 100 and 35% of the feldspars, and minor mafic minerals. Hornblende and biotite are the commonest mafic minerals, however, muscovite is also frequently encountered. Pyroxene, andalusite, corundum, tourmaline, garnet and topaz are also relatively common mafic minerals.

Gabbro is composed mainly of calcium-rich plagioclase feldspar (usually labradorite or bytownite) and clinopyroxene (augite). Minor amounts of olivine and orthopyroxene might also be present in the rock.

Granite containing rock is widely distributed throughout the continental crust.[8] Much of it was intruded during the Precambrian age; it is the most abundant basement rock that underlies the relatively thin sedimentary veneer of the continents. Outcrops of granite tend to form tors and rounded massifs. Granite often occurs as relatively small, less than 100 km² stock masses (stocks) and in batholiths that are often associated with orogenic mountain ranges.

Gabbro is an essential part of the oceanic crust, and can be found in many ophiolite complexes as parts of zones III and IV (sheeted dyke zone to massive gabbro zone). Long belts of gabbroic intrusions are typically formed at proto-rift zones and around ancient rift zone margins, intruding into the rift flanks. Mantle plume hypotheses may rely on identifying mafic and ultramafic intrusions and coeval basalt volcanism.

Granite has several uses. It may contain valuable minerals. These may be either gemstones or industrial minerals. Granite is an important construction material. It is hard and durable which makes it a very good material for aggregate. It is one of the most important dimension stones because of beautiful textures and colors. It is also massive and durable – ideal material for countertops.

Gabbro often contains valuable amounts of chromium, nickel, cobalt, gold, silver, platinum, and copper sulfides. Ocellar (orbicular) varieties of gabbro can be used as ornamental facing stones, paving stones and it is also known by the trade name of 'black granite', which is a popular type of graveyard headstone used in funerary rites. It is also used in kitchens and their countertops, also under the misnomer of 'black granite'.