Measuring Devices for the World's Most Extreme Environment 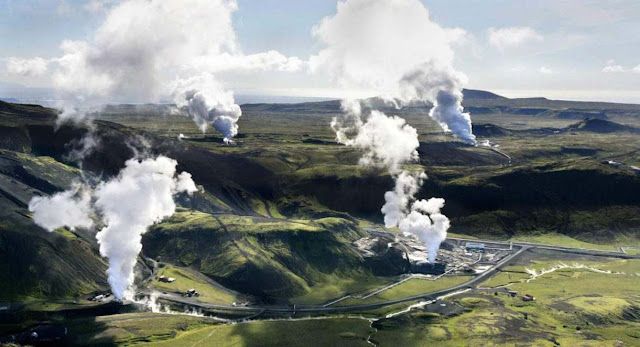 Norwegian research scientists are contributing to the development of the world's hottest geothermal well in a non-volcanic area. The goal is to exploit the inexhaustible supply of heat from the interior of the Earth, and this calls for equipment that can withstand the most extreme conditions.

The borehole is the world's hottest geothermal well in a non-volcanic area. Because terrestrial heat is encountered close to the surface in Italy, the country is rich in areas suitable for geothermal drilling – with searing temperatures reaching 500-600 degrees Celsius, resulting in supercritical water that the researchers are hoping to discover. And they have very good reasons.

If they can succeed in exploiting the energy in this water, they can drill geothermal wells that are ten times as effective as those currently in operation. This has the potential to reduce costs dramatically and pave the way for a fantastic energy future based on purely natural resources. However, in its supercritical phase, the liquid is corrosive and attacks any drilling equipment that encounters it.

"We are faced with a lot of big challenges, but we've come a long way," says Magnus Hjelstuen, Research Manager at SINTEF Harsh Environment Instrumentation.

The measuring equipment SINTEF has developed as part of this project is a so-called "wireline logging tool" that can measure downhole temperatures and pressures. Such measurements are crucial in the search for the extremely energy-rich supercritical water. Temperature and pressure data indicate when the drill bit has entered a zone containing such water, and the well's geothermal properties (both the maximum temperature and temperature changes caused by drilling) will tell us how much energy the well can produce.

Since electrical cables do not function at temperatures over 350°C, SINTEF's measuring equipment is battery-powered. The temperature is logged deep in the borehole and is read off when the device returns to the surface.

In its supercritical phase, the liquid is corrosive and attacks any drilling equipment that encounters it.

This is no simple task. At two to three kilometres into the Earth's interior the temperature and pressure rise enormously. Something very special happens when the temperature reaches 374 degrees and the pressure is 218 times the air pressure at the surface. We encounter what we call supercritical water. This water is in a physical state that progresses from liquid into gas – and from there into a supercritical phase, in which it is neither.

It is this special form of water, as yet undiscovered, that the researchers are looking for. To reach the conditions that make it supercritical, the water must have a temperature of at least 374°C, under pressures of 200 bar.

"A water column at room temperature must be taken to a depth of 2.2 kilometres below the surface to reach a pressure of 220 bar," Hjelstuen explains.

SINTEF uses electronics and sensors with extreme capabilities. Some of the components are in common use, while others are still at the prototype stage. The challenge for the Norwegian researchers has been to combine the sensors and electronics, and then develop computer software that enables the components to function together.

"Our challenge has been to find a combination of existing components which can perform optimally within our limitations in terms of instrument length, weight and diameter – not least in view of the environment the equipment will encounter in the well," says Hjelstuen.

The instrument is 2.6 metres long weighs 50 kilograms, but has a diameter of only 76 millimetres.

"For example, we use a micro-controller which functions at temperatures up to 300°C. This is only available as an early prototype (engineering sample). So we've been working closely with the manufacturer to get it to function the way we want it to," he adds.

At present, the limiting temperature for electronics is around 250°C, and this means that the range of components available is very restricted. The number of suitable batteries is also not large. For example, the most robust batteries on the market work at temperatures of only 70 to 200°C and would explode if subjected to a temperature of 215 degrees. So making measuring equipment can be a challenging process.

"Since we begin drilling at normal surface conditions, the temperature on a winter's day may be as low as 0°C to start with, rising to over 400°C at the bottom of a well. Tackling such fluctuations makes enormous demands on the equipment. We've created a sort of "reverse Thermos flask" in which the inside temperature is kept below 210 degrees so as to reduce the strain on the equipment," says Hjelstuen.

The sensors are trialled and tested before being shipped to the field.

"At every stage an enormous amount of testing must be carried out in a way that as closely as possible simulates the environment our instruments will encounter in the well. Among other things we have used a furnace at Raufoss to test the technology at temperatures up to 450°C.

In the process of harnessing the energy in the supercritical water, the researchers have made good use of the Norwegian petroleum industry's experience in drilling deep oil wells. The exploitation of geothermal heat has much in common with oil recovery. Petroleum technologists are therefore included in the team. However, whereas we have for many decades succeeded in exploiting the potential found in petroleum resources, nobody has yet managed to harness supercritical water.

"If we can succeed in exploiting geothermal heat there will be enough of it to supply the entire population of the planet with energy for many generations. There are nuclear power plants where water that meets the conditions for supercritical water is fed through turbines, so we know that we can succeed in exploiting the energy in such water once we have managed to extract it."

In the project's deepest descent into the Earth, the research team carried out measurements at a depth of 2810 metres. Here the temperature reached 443.6°C.

The above story is based on materials provided by SINTEF.
Share to: