The Mysterious Living Stones of Romania: They Grow and Move

Known in Romania as “Trovants” the stones of Costesti, Romania are a type of sandstone concretion that secrete cement and can at times appear to grow as if alive.

Consisting of a stone core with an outer shell of sand, after a heavy rain small forms are said to appear on the rocks leading them to be dubbed the “growing stones” by locals.

These Trovants of Romania are an amazing geological phenomena, found in a small village named Costesti. Trovants is a synonym for the German term “Sandsteinkonkretionen“, which means Cemented Sand. They were believed to be a type of sandstone concretion that secrete cement and can appear to grow at times, as if they are alive.

These fascinating ‘living stones’ were thought to consist of a stone core with an outer shell of sand, and after a heavy rain small stone forms are said to appear on the rocks leading them to be dubbed as the “growing stones”. What’s more interesting is the fact that these Trovants when cut had spherical and ellipsoidal rings similar to the ones of a tree trunk. These growing rocks were thought to look identical and even move like the sliding rocks of death valley.

Stones that grow and… move?

There were few studies about origin of these growing stones of Romania, and there are many hypothesis, some of them even fantastical. According to International Geological Congress conducted in Oslo 2008, these “Trovanti” were improperly considered as “sandstone concretions”. The study of these trovants was started in the Carpathians area from about 1883 (Cobalcescu) and by 1900 Koch gave his opinions about their origin.

It was found that there was no mineralogical difference between these pseudoconcretions and the surrounding sands, with no distinct nucleus inside them, and their cement is often carbonate-type. According to some reports, there was a sedimentation basin in this area some 6 million years ago, and the trovants were not identical, and complex aggregates of two ore more trovants can often be found.

According to the hypothesis of the congress, the Trovants of Romania represent diagenetic textures reflecting paleodynamic (paleoseismic) conditions and correspond to specific compactions of the sandy sediments containing locally solutions (especially carbonate) accumulated in the sand, which during important seismic shocks and under the influence of the internal cohesion forces tended to spherical forms.

The gravitation force, seismic shocks, solution cohesion forces (particularly surface tension) and the adhesion strength between the sand grains and the liquid are believed to be involved in this process. It is to be noted that this hypothesis on the seismic origin of the trovants is very well sustained by many laboratory experiments.

The perfect spherical shaped Trovants which sometimes can be found are believed to be because of great magnitudes and durations of the paleoearthquakes. There are many trovants in Romania which are even diversely shaped. As far as the growth of these ‘living stones’ is concerned, certain stones may gradually get slightly larger as the result of absorbing water, in this case, the accumulations and deposits of minerals cemented by waters rich in calcium carbonate seems to be the reason.

The growth of Trovant stones in Romania is believed to happen when a chemical reaction sets in between the layers of deposits and the mineral carbonates in the presence of rain water. 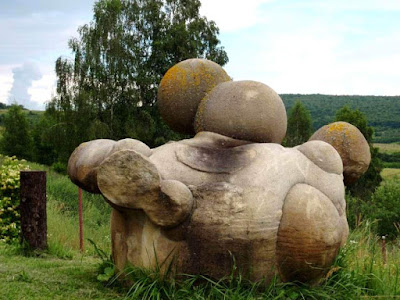 Because of this fascinating ‘living rocks’ that seem to grow, the site became a good tourist attraction for Romania. To protect these unusual geological creations, the “Muzeul Trovantilor” or Trovants Museum Natural Reserve was developed in Valcea County by the local body in 2004, and is now protected by UNESCO.

Read also:
What is Maw-sit-sit?
What Is a Septarian Concretion?
How Utah's Mysterious Moqui Marbles Formed?
What Is Petoskey Stone, and Where Can You Find It?
Share to: