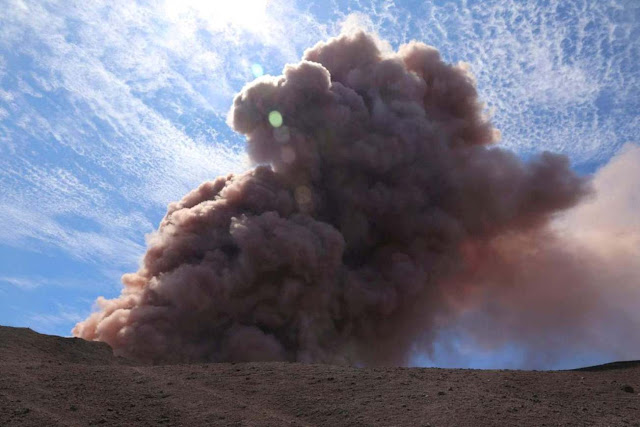 The southern part of Hawaii's Big Island has been jolted by strong earthquakes, sputtering lava and toxic gas as magma shifted underneath a restless Kilauea volcano. The trifecta of natural threats forced residents to evacuate and prompted the closure of parks and college campuses on Friday.

Multiple new vents, from which lava is spurting out of the ground, formed in the same residential neighborhood where molten rock first emerged Thursday. At midday, a magnitude 6.9 earthquake struck -- the biggest of hundreds of quakes this week and the largest to strike the state in 43 years. It hit just an hour after another sizeable quake.

"The magma moving down the rift zones, it causes stress on the south flank of the volcano," Babb said. "We're just getting a series of earthquakes." She said scientists were studying whether the quakes would affect the eruption.

Residents were also warned to watch out for dangerous levels of sulfuric gas. Volcano expert Paul Davis said the gas occurs during the melting process. "It's sort of like you've injected ammonia into all your nose, into your breathing area, into your throat," Davis told CBS News.

Meanwhile, the lava lake at Kilauea's summit crater dropped significantly, suggesting the magma was moving eastward toward Puna, a mostly rural district of forests, papaya farms and lava fields left by past eruptions. Officials ordered more than 1,700 people out of Big Island communities near the lava, warning of the dangers of spattering hot rock and high levels of sulfuric gas that could threaten the elderly and people with breathing problems.

Julie Woolsey evacuated her home late Thursday as a volcanic vent, or an opening in the Earth's surface where lava emerges, sprouted up on her street in the Leilani Estates neighborhood. "We knew we were building on an active volcano," she said, but added that she thought the danger from lava was a remote possibility.

Big Island Mayor Harry Kim said residents could return to their homes as soon as the area is deemed safe.


"All of us have got to remember this is a tragedy on them and we have to work .... to minimize it as best as possible," Kim said. "I'm from Puna so I am not going to be a hypocritical. That's my home and I love Puna. There is no place to me more beautiful ... and we know the hazards."

Lava was about 1,000 yards from Woolsey's home, which was built on a lot purchased for $35,000 11 years ago after living on Maui became too expensive.

KGMB reports that the extent of the damage isn't yet known, but officials said at least two structures were significantly damaged and a number of roads have been covered in lava or severely cracked.

State Sen. Russell Ruderman said he's experienced many earthquakes, but the magnitude-5.4 temblor that hit first "scared the heck out of me." Merchandise fell off the shelves in a natural food store he owns. When the larger quake followed, he said he felt strong shaking in Hilo, the island's largest city that is roughly 45 minutes from the rural Puna area.

"We're all rattled right now," he said. "It's one thing after another. It's feeling kind of stressful out here."

Hawaii Electric Light said the jolt knocked out power to about 14,400 customers, but electricity was restored about two hours later.

Hawaii Volcanoes National Park evacuated all visitors and non-emergency staff. The quakes triggered rock slides on park trails and crater walls. Narrow fissures appeared on the ground at a building overlooking the crater at Kilauea's summit.

The University of Hawaii at Hilo and Hawaii Community College both closed campuses to allow students and employees to "attend to personal business and priorities." Authorities already had closed a long stretch of Highway 130, one of the main arteries through Puna, because of the threat of sulfuric gas.

At Leilani Estates, where lava was pushing through cracks in the earth, some residents still wanted to get home. Brad Stanfill said the lava was more than 3 miles from his house but he was not allowed in because of a mandatory evacuation order. He was frustrated because he wanted to feed his rabbits and dogs and check on his property.


When was the last time Kilauea had a major eruption?

Kilauea is Hawaii’s most active volcano and parts of it have been continuously erupting since January 3, 1983. But the last major volcanic eruption at Kilauea was in 2014 and lasted for several months.

People are advised to stay away from the evacuated areas near Kilauea, which are on the south side of the island of Hawaii, about 30 miles from Hilo.

Hawaiian Airlines is offering customers travel waivers for flights scheduled for Thursday, May 3 and Friday, May 4. The new flight must be booked by Friday, May 11 and have to be made for seats in same flight class with the same origin and destination.

The Department of Education also announced that several schools were closed on Friday because of the volcano eruption.
Share to: