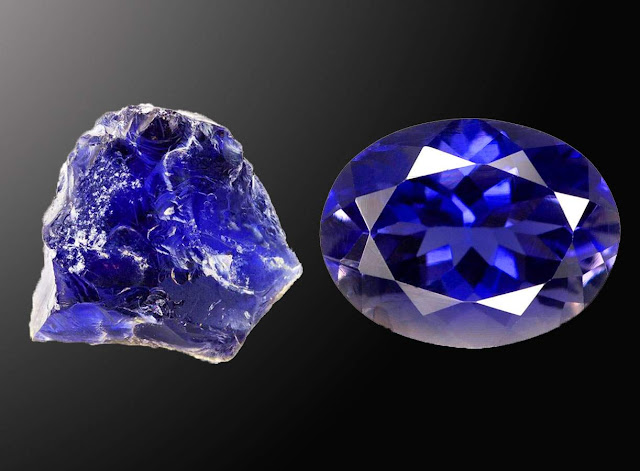 Iolite is also named "water sapphire", cordierite or dichroite. It describes the transparent to translucent form of Cordierite, and it has recently become a popular gemstone.  Iolite has been worn for centuries and derives its name from “Ios” - the Greek word for violet. It is often claimed, that due to it’s strong pleochroism, ancient Vikings used iolite for navigation on cloudy days. It is conjectured that the gemstone acted as a polarizing filter and allowed the ancient sailors to determine the position of the sun.

It describes the transparent to translucent form of Cordierite, and it has recently become a popular gemstone. Iolite can be light to deep blue, and usually has a purplish tinge to it. Deeper colored stones are more valuable. Iolite is very affordable and durable, and can be used as a substitute for more expensive blue gemstones such as Sapphire.

Other associated minerals include garnet (cordierite-garnet-sillimanite gneisses) and anthophyllite. Cordierite also occurs in some granites, pegmatites, and norites in gabbroic magmas. Alteration products include mica, chlorite, and talc. Cordierite occurs, for example, in the granite contact zone at Geevor Tin Mine in Cornwall.

Gem quality iolite varies in color from sapphire blue to blue violet to yellowish gray to light blue as the light angle changes. Iolite is sometimes used as an inexpensive substitute for sapphire. It is much softer than sapphires and is abundantly found in Australia (Northern Territory), Brazil, Burma, Canada (Yellowknife area of the Northwest Territories), India, Madagascar, Namibia, Sri Lanka, Tanzania and the United States (Connecticut).

Iolite was all but unknown in Wyoming before my 1996 discover of fabulous gem-quality iolite at Palmer Canyon to the west of Wheatland, Wyoming. The only other report of iolite in Wyoming at that time was by John Sinkankas in a gemstone book that alluded to a giant, rich, iolite deposit, but gave no specifics, no location, and left one wondering where could this deposit be located.

Giant iolite gemstones including the largest iolite gems in the world were discovered in the Laramie Mountains of Wyoming. Gemstones weighing >24,000 carats were recovered from Grizzly Creek with masses left in the outcrop that are estimated to include stones of more than a hundred thousand carts and some that could potentially top a million carats. Many of these were massive transparent stones and others were highly fractured but also transparent with excellent color.


See also:
What Is Druzy, and How Does It Form?
Tourmaline: Species and Color Varieties
Crystal Formations and Their Meanings
Share to: