What Are Organic Gemstones? 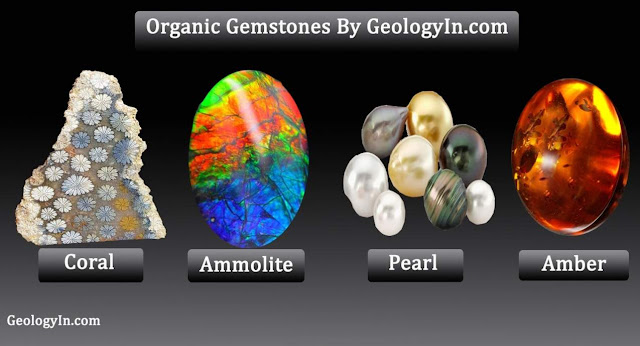 Almost all gemstones are minerals with a crystalline structure. However, some gems are not really gemstones. Rather their origin is organic. This means that they formed from biological processes, whether animal or vegetable. Unlike other gemstones that are made of minerals, organic gemstones are renewable and in some cases can be farmed (like Pearls).

Amber is a hard sap or resin from aged pine trees and is a organic gemstone.Much valued from antiquity to the present as a gemstone, amber is made into a variety of decorative objects. Amber is used in jewelry. Amber has been used as jewelry since the Stone Age, from 13,000 years ago.Amber occurs in a range of different colors. As well as the usual yellow-orange-brown that is associated with the color "amber", amber itself can range from a whitish color through a pale lemon yellow, to brown and almost black. Other uncommon colors include red amber (sometimes known as "cherry amber"), green amber, and even blue amber, which is rare and highly sought after. The most prized pieces contain inclusions of insects, plants or pyrite. Read also: Pictures: Types of Amber

The marine based gemstone which is made of calcium carbonate found below the vast oceans.  Corals are very small marine animals that live in huge colonies and extract calcium carbonate from the sea.  The corals use the calcium carbonate to build up its home up, around, and above itself.  When a generation of coral dies it dies so within its home, the new generation thus building on top of the old and so on.  This process produces the massive coral reefs you see today!  Gemstone corals appear semitransparent to opaque and the colors can be found white, pink, orange, red, violet and sometimes gold and black (horny organic substances that are not calcium carbonate).  Coral gems are used to make beads, carvings, cameos, and figurines.

Jet is a type of coal, a carbon and hydrocarbon mixed compound. Jet is not a mineral, but rather a mineraloid. It has an organic origin, being derived from decaying wood under extreme pressure. Jet is either black or dark brown, but may contain pyrite inclusions, which are of brassy colour and metallic lustre. Jet has also been known as black amber, as it may induce an electric charge like that of amber when rubbed. Jet has a Mohs hardness ranging between 2.5 and 4 and a specific gravity of 1.30 to 1.34. The refractive index of jet is approximately 1.66. Jet is found in two forms, hard and soft. Hard jet is the result of carbon compression and salt water; soft jet is the result of carbon compression and fresh water.

The famous pearl is a organic gemstone and has been used as jewelry for thousands of years.  Pearls are made by mollusk animals( organic creatures enclosed within a shell) typically clams, mussels, and oysters. The soft tissue in the mollusc animal creates a mucus called nacre which hardens thus creating a pearl.  Pearl bearing molluscs can be found in both salt as well as fresh waters.  The salt water mollusc create organic gemstones of much higher value.  Where as the fresh water mollusc (clams and mussels) produce pearls for less desirable jewelry and decorations.  The perfect pearl is round but can come in any abstract shape (usually never rough shaped or with sharp edges). The color of a pearl varies from white, cream, light rose, cream rose, black, gray, bronze, blue, dark blue, green, dark green, purple, yellow, as well as violet.

Ammolite is an opal-like organic gemstone.  It is made of the fossilized shells of ammonites, which in turn are composed primarily of aragonite, the same mineral contained in nacre, with a microstructure inherited from the shell. It is one of few biogenic gemstones; others include amber and pearl. Ammolite is also known as aapoak, gem ammonite, calcentine, and Korite. The chemical composition of ammolite is variable, and aside from aragonite may include calcite, silica, pyrite, or other minerals. Its crystallography is orthorhombic. Its hardness is 4.5–5.5, and its specific gravity is 2.60–2.85. Significant deposits of gem-quality ammolite are only found in the Bearpaw Formation that extends from Alberta to Saskatchewan in Canada and south to Montana in the USA.

Organic gemstones are formed naturally and are crafted into desired shapes.  Because the most beautiful of natures creations take time, the gemstones maintain their rare value.  For thousands of years the elegance of these organic gemstones grace jewelry and decorations all over the world.