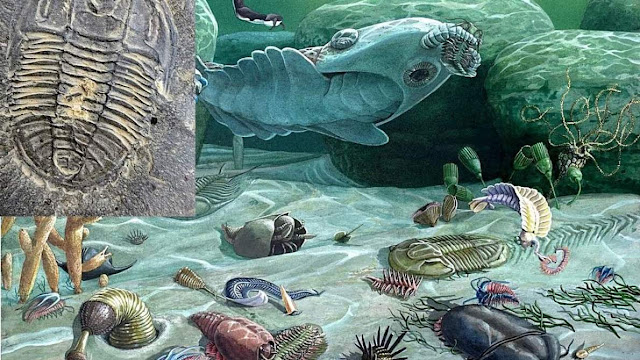 The Cambrian Explosion –“Supernova of Biology Detonated by Plate Tectonics”

The quest to discover what drove one of the most important evolutionary events in the history of life on Earth has taken a new, fascinating twist.

A team of scientists have given a fresh insight into what may have driven the "Cambrian Explosion" -- a period of rapid expansion of different forms of animal life that occurred over 500 million years ago.

While a number of theories have been put forward to explain this landmark period, the most credible is that it was fuelled by a significant rise in oxygen levels which allowed a wide variety of animals to thrive.

The new study suggests that such a rise in oxygen levels was the result of extraordinary changes in global plate tectonics.

During the formation of the supercontinent 'Gondwana', there was a major increase in continental arc volcanism -- chains of volcanoes often thousands of miles long formed where continental and oceanic tectonic plates collided. This in turn led to increased 'degassing' of CO2 from ancient, subducted sedimentary rocks.

This, the team calculated, led to an increase in atmospheric CO2 and warming of the planet, which in turn amplified the weathering of continental rocks, which supplied the nutrient phosphorus to the ocean to drive photosynthesis and oxygen production.

During his MSc project he used a sophisticated biogeochemical model to make the first quantification of changes in atmospheric oxygen levels just prior to this explosion of life.

Co-author and project supervisor Professor Tim Lenton, from the University of Exeter's Global Systems Institute said: "One of the great dilemmas originally recognised by Darwin is why complex life, in the form of fossil animals, appeared so abruptly in what is now known as the Cambrian explosion.

"Many studies have suggested this was linked to a rise in oxygen levels -- but without a clear cause for such a rise, or any attempt to quantify it."

Not only did the model predict a marked rise in oxygen levels due to changes in plate tectonic activity, but that rise in oxygen -- to about a quarter of the level in today's atmosphere -- crossed the critical levels estimated to be needed by the animals seen in the Cambrian explosion.

Williams added: "What is particularly compelling about this research is that not only does the model predict a rise in oxygen to levels estimated to be necessary to support the large, mobile, predatory animal life of the Cambrian, but the model predictions also show strong agreement with existing geochemical evidence."

"It is remarkable to think that our oldest animal ancestors -- and therefore all of us -- may owe our existence, in part, to an unusual episode of plate tectonics over half a billion years ago" said Professor Lenton.

The above story is based on Materials provided by University of Exeter.
Share to: