Earth's Magnetic Field Reversals May Take Much Longer Than We Thought 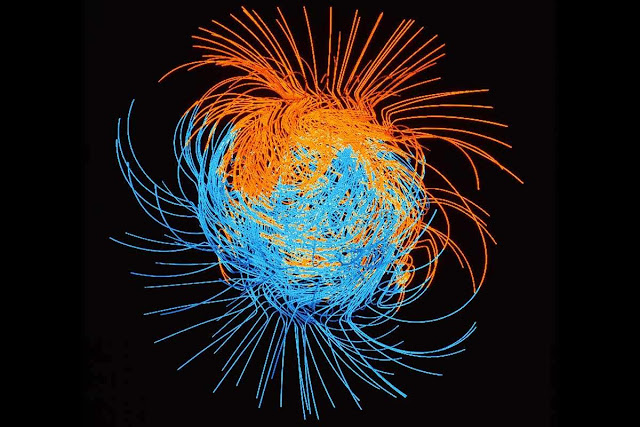 Earth's Magnetic Field Went Completely Haywire During Last Reversal and Took 22,000 Years to Get Back to Normal

Yet, largely hidden from daily life, the field drifts, waxes and wanes. The magnetic North Pole is currently careening toward Siberia, which recently forced the Global Positioning System that underlies modern navigation to update its software sooner than expected to account for the shift.

And every several hundred thousand years or so, the magnetic field dramatically shifts and reverses its polarity: Magnetic north shifts to the geographic South Pole and, eventually, back again. This reversal has happened countless times over the Earth's history, but scientists have only a limited understanding of why the field reverses and how it happens.

New work from University of Wisconsin-Madison geologist Brad Singer and his colleagues finds that the most recent field reversal, some 770,000 years ago, took at least 22,000 years to complete. That's several times longer than previously thought, and the results further call into question controversial findings that some reversals could occur within a human lifetime.

The new analysis -- based on advances in measurement capabilities and a global survey of lava flows, ocean sediments and Antarctic ice cores -- provides a detailed look at a turbulent time for Earth's magnetic field. Over millennia, the field weakened, partially shifted, stabilized again and then finally reversed for good to the orientation we know today.

The results provide a clearer and more nuanced picture of reversals at a time when some scientists believe we may be experiencing the early stages of a reversal as the field weakens and moves. Other researchers dispute the notion of a present-day reversal, which would likely affect our heavily electronic world in unusual ways.

Singer published his work Aug. 7 in the journal Science Advances. He collaborated with researchers at Kumamoto University in Japan and the University of California, Santa Cruz.

"Reversals are generated in the deepest parts of the Earth's interior, but the effects manifest themselves all the way through the Earth and especially at the Earth's surface and in the atmosphere," explains Singer. "Unless you have a complete, accurate and high-resolution record of what a field reversal really is like at the surface of the Earth, it's difficult to even discuss what the mechanics of generating a reversal are."

Earth's magnetic field is produced by the planet's liquid iron outer core as it spins around the solid inner core. This dynamo action creates a field that is most stable going through roughly the geographic North and South poles, but the field shifts and weakens significantly during reversals.

As new rocks form -- typically either as volcanic lava flows or sediments being deposited on the sea floor -- they record the magnetic field at the time they were created. Geologists like Singer can survey this global record to piece together the history of magnetic fields going back millions of years. The record is clearest for the most recent reversal, named Matuyama-Brunhes after the researchers who first described reversals.

For the current analysis, Singer and his team focused on lava flows from Chile, Tahiti, Hawaii, the Caribbean and the Canary Islands. The team collected samples from these lava flows over several field seasons.

"Lava flows are ideal recorders of the magnetic field. They have a lot of iron-bearing minerals, and when they cool, they lock in the direction of the field," says Singer. "But it's a spotty record. No volcanoes are erupting continuously. So we're relying on careful field work to identify the right records."

The researchers combined magnetic readings and radioisotope dating of samples from seven lava flow sequences to recreate the magnetic field over a span of about 70,000 years centered on the Matuyama-Brunhes reversal. They relied on upgraded methods developed in Singer's WiscAr geochronology lab to more accurately date the lava flows by measuring the argon produced from radioactive decay of potassium in the rocks.

They found that the final reversal was quick by geological standards, less than 4,000 years. But it was preceded by an extended period of instability that included two excursions -- temporary, partial reversals -- stretching back another 18,000 years. That span is more than twice as long as suggested by recent proposals that all reversals wrap up within 9,000 years.

The lava flow data was corroborated by magnetic readings from the seafloor, which provides a more continuous but less precise source of data than lava rocks. The researchers also used Antarctic ice cores to track the deposition of beryllium, which is produced by cosmic radiation colliding with the atmosphere. When the magnetic field is reversing, it weakens and allows more radiation to strike the atmosphere, producing more beryllium.

Since humanity began recording the strength of the magnetic field, it has decreased in strength about five percent each century. As records like Singer's show, a weakening field seems to be a precursor to an eventual reversal, although it's far from clear that a reversal is imminent.

A reversing field might significantly affect navigation and satellite and terrestrial communication. But the current study suggests that society would have generations to adapt to a lengthy period of magnetic instability.

"I've been working on this problem for 25 years," says Singer, who stumbled into paleomagnetism when he realized the volcanoes he was studying served as a good record of Earth's magnetic fields. "And now we have a richer record and better-dated record of this last reversal than ever before."


The above story is based on Materials provided by University of Wisconsin-Madison. Original written by Eric Hamilton.
Share to: