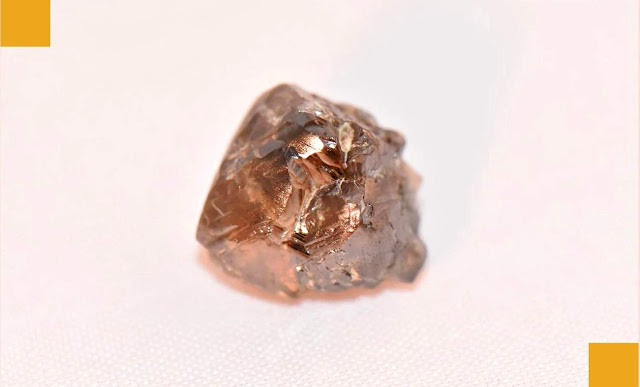 Kevin Kinard was visiting Arkansas' Crater of Diamonds State Park when he discovered a 9.07 carat diamond.

A bank manager discovered a 9.07-carat diamond at a state park in southwestern Arkansas after thinking the precious gem was a piece of glass.

Kevin Kinard of Maumelle found the second-largest diamond in the 48-year history of Crater of Diamonds State Park on Labor Day, according to a news release from Arkansas State Parks.

Kinard said he and his friends hauled sifting equipment to the state park in Murfreesboro. Kinard noted that he’s been visiting Crater of Diamonds regularly since he was a kid but had never stumbled upon a diamond until Sept. 7.

“I only wet sifted for about ten minutes before I started walking up and down the plowed rows,” he said. “Anything that looked like a crystal, I picked it up and put it in my bag.”

While searching in the southeast portion of the 37.5-acre diamond search area, Kinard scooped up a marble-sized crystal that had a rounded, dimpled shape.

“It kind of looked interesting and shiny, so I put it in my bag and kept searching,” Kinard said. “I just thought it might’ve been glass.”

“I almost didn’t have them check my finds, because I didn’t think I had found anything,” Kinard said. “My friend had hers checked, though, so I went ahead and had them check mine, too.”

The stone is the second-largest diamond ever found at the park, which opened in 1972 and is one of the only public diamond fields in the world. Crater of Diamonds has registered over 240 diamonds this year, according to the news release, and sees an average of about one or two diamonds per day. Visitors often bring their own tools to search the 37-acre diamond field, but they aren’t allowed to use battery or motor-powered tools.

“A find like this is always thrilling for the park guest, as well as the park staff, who get to help identify the gem and share in the excitement,” Stacy Hurst, secretary of the Arkansas Department of Parks, Heritage and Tourism, said in the release.

The previous record for the second-largest diamond found at the park since its 1972 opening was an 8.82 carat white diamond found in 1981. In 2019, a Texas woman found a 3.72-carat yellow diamond at the park. The largest diamond ever found there is a 16.37-carat white diamond named Amarillo Starlight, which was unearthed in 1975. Assistant Superintendent Dru Edmonds said in the release, “Mr. Kinard’s diamond is very large, with a brandy brown color. It has a rounded, dewdrop shape and a metallic shine typical of all Crater diamonds.”

Waymon Cox, park interpreter at Crater of Diamonds, told The Washington Post via email that the park employees “cannot determine a diamond’s value at the park,” but he noted that similarly sized finds have been estimated to be worth a fortune in the past. In 2015, for example, an 8.52-carat diamond found at the park was valued at around $1,000,000 after it was cut into a 4.63-carat triolette.

Lucky visitors who do find diamonds are typically asked to name the stones, and Kinard named his in honor of friends who visited the park with him on Labor Day — the Kinard Friendship Diamond.

“We love to travel together and had such a great time out here,” Kinard said of their trip to the park. “It was a very humbling experience.”

The above story is based on materials provided by Arkansas State Parks.