How Could Surface Minerals Get in Diamonds Found in The Deepest Depths of The Earth? 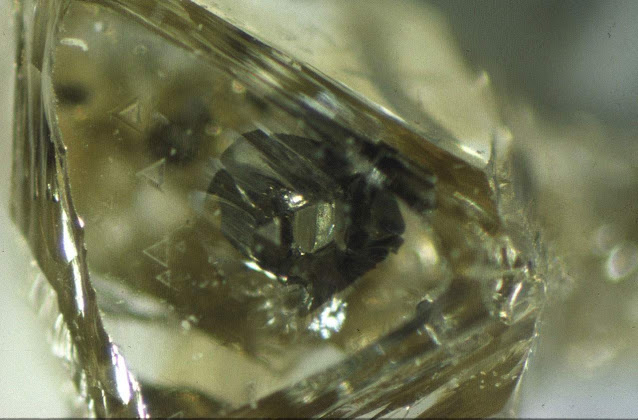 Diamonds that formed hundreds of kilometers deep below Earth's surface contain traces of chemical reactions that took place on the bottom of the ocean.

Diamonds that formed deep in the Earth's mantle contain evidence of chemical reactions that occurred on the seafloor. Probing these gems can help geoscientists understand how material is exchanged between the planet's surface and its depths.

New work published in Science Advances confirms that serpentinite -- a rock that forms from peridotite, the main rock type in Earth's mantle, when water penetrates cracks in the ocean floor -- can carry surface water as far as 700 kilometers deep by plate tectonic processes.

"Nearly all tectonic plates that make up the seafloor eventually bend and slide down into the mantle -- a process called subduction, which has the potential to recycle surface materials, such as water, into the Earth," explained Carnegie's Peng Ni, who co-led the research effort with Evan Smith of the Gemological Institute of America.

Serpentinite residing inside subducting plates may be one of the most significant, yet poorly known, geochemical pathways by which surface materials are captured and conveyed into the Earth's depths. The presence of deeply-subducted serpentinites was previously suspected -- due to Carnegie and GIA research about the origin of blue diamonds and to the chemical composition of erupted mantle material that makes up mid-ocean ridges, seamounts, and ocean islands. But evidence demonstrating this pathway had not been fully confirmed until now.

The research team -- which also included Carnegie's Steven Shirey, and Anat Shahar, as well as GIA's Wuyi Wang and Stephen Richardson of the University of Cape Town -- found physical evidence to confirm this suspicion by studying a type of large diamonds that originate deep inside the planet.

"Some of the most famous diamonds in the world fall into this special category of relatively large and pure gem diamonds, such as the world-famous Cullinan," Smith said. "They form between 360 and 750 kilometers down, at least as deep as the transition zone between the upper and lower mantle."

Sometimes they contain inclusions of tiny minerals trapped during diamond crystallization that provide a glimpse into what is happening at these extreme depths.

"Studying small samples of minerals formed during deep diamond crystallization can teach us so much about the composition and dynamics of the mantle, because diamond protects the minerals from additional changes on their path to the surface," Shirey explained.

In this instance, the researchers were able to analyze the isotopic composition of iron in the metallic inclusions. Like other elements, iron can have different numbers of neutrons in its nucleus, which gives rise to iron atoms of slightly different mass, or different "isotopes" of iron. Measuring the ratios of "heavy" and "light" iron isotopes gives scientists a sort of fingerprint of the iron.

The diamond inclusions studied by the team had a higher ratio of heavy to light iron isotopes than typically found in most mantle minerals. This indicates that they probably didn't originate from deep-Earth geochemical processes. Instead, it points to magnetite and other iron-rich minerals formed when oceanic plate peridotite transformed to serpentinite on the seafloor. This hydrated rock was eventually subducted hundreds of kilometers down into the mantle transition zone, where these particular diamonds crystallized.

"Our findings confirm a long-suspected pathway for deep-Earth recycling, allowing us to trace how minerals from the surface are drawn down into the mantle and create variability in its composition," Shahar concluded.

The above story is based on Materials provided by Carnegie Institution for Science.