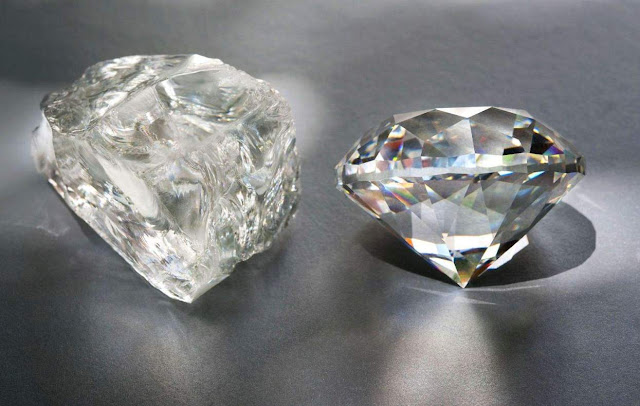 Currently, diamond is regarded to be one of the hardest and most scratch-resistant natural materials in the world. Most diamonds found in nature and often used in jewelry display a cubic crystal structure, a repeating pattern of 8 atoms forming a cube with carbon atoms at its vertices. Each carbon atom forms four bonds with its neighbors, explaining the overall stability and hardness of the crystal structure.

Nature's strongest material now has some stiff competition. For the first time, researchers have hard evidence that human-made hexagonal diamonds are stiffer than the common cubic diamonds found in nature and often used in jewelry.

Named for their six-sided crystal structure, hexagonal diamonds have been found at some meteorite impact sites, and others have been made briefly in labs, but these were either too small or had too short of an existence to be measured.

"Diamond is a very unique material," said Yogendra Gupta, director of the Institute for Shock Physics and corresponding author on the study. "It is not only the strongest -- it has beautiful optical properties and a very high thermal conductivity. Now we have made the hexagonal form of diamond, produced under shock compression experiments, that is significantly stiffer and stronger than regular gem diamonds."

Researchers have long wanted to create a material stronger than natural diamonds, which could have a variety of uses in industry. While many theorized that hexagonal diamonds would be stronger, the WSU study provides the first experimental evidence that they are.

Lead author Travis Volz, now a post-doctoral researcher at Lawrence Livermore National Laboratory, focused his dissertation work at WSU on the creation of hexagonal diamonds from graphite. For this study, Volz and Gupta used gunpowder and compressed gas to propel small graphite disks about the size of a dime at a speed of around 15,000 miles per hour onto a transparent material. The impact produced shockwaves in the disks that very rapidly transformed them into hexagonal diamonds.

Immediately after impact the researchers produced a small sound wave and used lasers to measure its movement through the diamond. Sound moves faster through stiffer material. Previously sound moved fastest through cubic diamond; in the lab-created hexagonal diamonds it moved faster.

Each process happened in several billionths of a second, or nanoseconds, but the researchers were able to make the stiffness measurements before the high velocity impact destroyed the diamond.

Stiffness is the ability of a material to resist deformation under a force or pressure -- for instance, a rock is stiffer than rubber as rubber will bend when pressed. Hardness is the resistance to scratching or other surface deformations.

Generally stiffer materials are also harder, said Volz. While the researchers weren't able to scratch the diamonds to test hardness directly, by measuring the diamonds' stiffness, they can make inferences about their hardness.

If the science advances to the point where lab-made hexagonal diamonds can be created and recovered, they could have a range of uses.

While the industrial advantages are clear, Gupta said it is still possible hexagonal diamonds could one day be used on engagement rings. Currently lab-made cubic diamonds have less value compared to their natural peers, but hexagonal diamonds would likely be more novel.

"If someday we can produce them and polish them, I think they'd be more in-demand than cubic diamonds," said Gupta. "If somebody said to you, 'look, I'm going to give you the choice of two diamonds: one is lot more rare than the other one.' Which one would you pick?"

The above story is based on Materials provided by Washington State University. Original written by Sara Zaske.