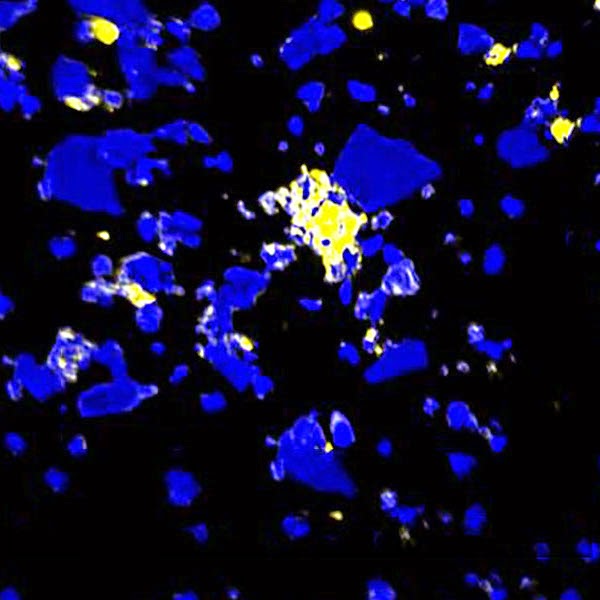 The study shows for the first time that the surface acidity of common minerals found in soil determines whether the gas nitrous acid will be released into the atmosphere. The finding could contribute to improved models for understanding and controlling air pollution, a significant public health concern.
"We find that the surfaces of minerals in the soil can be much more acidic than the overall pH of the soil would suggest," said Jonathan Raff, assistant professor in the School of Public and Environmental Affairs and Department of Chemistry. "It's the acidity of the soil minerals that acts as a knob or a control lever, and that determines whether nitrous acid outgasses from soil or remains as nitrite."
The article, "Soil surface acidity plays a determining role in the atmospheric-terrestrial exchange of nitrous acid," will be published this week in the journal Proceedings of the National Academy of Sciences. Melissa A. Donaldson, a Ph.D. student in the School of Public and Environmental Affairs, is the lead author. Co-authors are Raff and David L. Bish, the Haydn Murray Chair of Applied Clay Mineralogy in the Department of Geological Sciences.
Nitrous acid, or HONO, plays a key role in regulating atmospheric processes. Sunlight causes it to break down into nitric oxide and the hydroxyl radical, OH. The latter controls the atmospheric lifetime of gases important to air quality and climate change and initiates the chemistry leading to the formation of ground-level ozone, a primary component of smog.
Scientists have known about the nitrous acid's role in air pollution for 40 years, but they haven't fully understood how it is produced and destroyed or how it interacts with other substances, because HONO is unstable and difficult to measure.

"Only in the last 10 years have we had the technology to study nitrous acid under environmentally relevant conditions," Raff said.
Recent studies have shown nitrous acid to be emitted from soil in many locations. But this was unexpected because, according to basic chemistry, the reactions that release nitrous acid should take place only in extremely acidic soils, typically found in rain forests or the taiga of North America and Eurasia.
The standard method to determine the acidity of soil is to mix bulk soil with water and measure the overall pH. But the IU researchers show that the crucial factor is not overall pH but the acidity at the surface of soil minerals, especially iron oxides and aluminum oxides. At the molecular level, the water adsorbed directly to these minerals is unusually acidic and facilitates the conversion of nitrite in the soil to nitrous acid, which then volatilizes.
"With the traditional approach of calculating soil pH, we were severely underestimating nitrous acid emissions from soil," Raff said. "I think the source is going to turn out to be more important than was previously imagined."
The research was carried out using soil from a farm field near Columbus, Ind. But aluminum and iron oxides are ubiquitous in soil, and the researchers say the results suggest that about 70 percent of Earth's soils could be sources of nitrous acid.
Ultimately, the research will contribute to a better understanding of how nitrous acid is produced and how it affects atmospheric processes. That in turn will improve the computer models used by the U.S. Environmental Protection Agency and other regulatory agencies to control air pollution, which the World Health Organization estimates contributes to 7 million premature deaths annually.
"With improved models, policymakers can make better judgments about the costs and benefits of regulations," Raff said. "If we don't get the chemistry right, we're not going to get the right answers to our policy questions regarding air pollution."

Note: This story has been adapted from a news release issued by the Indiana University
Share to: