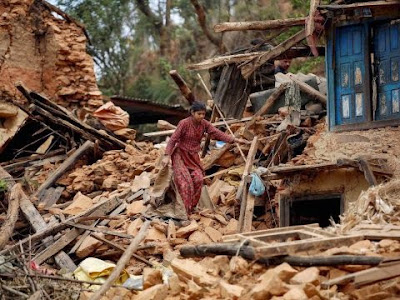 A 7.4-magnitude quake has rocked Nepal, followed by two major aftershocks. At least 36 people have been killed in Nepal, and over a thousand injured. It comes weeks after another disastrous quake left over 8,000 people dead, affecting millions.
The quake, which struck near the base camp for Mount Everest, was measured at a shallow depth of about 10 kilometers.
At least three people were killed and more than 300 injured in the latest quake.
Residents in the Indian town of Siliguri, near the border with Nepal, said they saw chunks of concrete fall off one or two buildings.
"This is a really big one," said Prakash Shilpakar, the owner of a handicrafts shop in Kathmandu who was trying to call his parents in the town of Bhaktapur, devastated in the April 25 quake.
Shockwaves were felt across northern India and as far away as the capital New Delhi, where buildings swayed for more than a minute and people scurried into the streets.
People in Kathmandu rushed outdoors, Reuters reporters said. There were no immediate reports of damage to buildings. Shopkeepers closed their shops.
A 7.8-magnitude earthquake struck April 25, killing at least 8,046 people and injuring more than 17,800.
Read also: What caused the Nepal earthquake?
Share to: