To scientists' delight, the incredible appendage from 99 million years ago is covered in feathers.

Some 99 million years ago, a juvenile dinosaur got its feathery tail stuck in tree resin, a death trap for the small creature. But its misfortune is now giving scientists unique insight into feathered dinosaurs that prospered during the Cretaceous Period.

Researchers said on Thursday a chunk of amber - fossilized resin - spotted by a Chinese scientist in a market in Myitkyina, Myanmar, last year contained 1.4 inches (36 mm) of the tail of the dinosaur, complete with bones, flesh, skin and feathers. The dinosaur itself was no more than 6 inches (15 cm) long, about the size of a sparrow.

"This is the first of its kind," said paleontologist Ryan McKellar of the Royal Saskatchewan Museum in Canada, one of the researchers involved in the study published in the journal Current Biology. "I'm blown away."

The scientists suspect the tail belonged to a type of two-legged, bird-like dinosaur called a maniraptoran, one of several groups of dinosaurs that possessed feathers. Birds, which first appeared about 150 million years ago during the Jurassic Period, evolved from small, feathered dinosaurs.

The researchers used sophisticated scanning and microscopic observations to study the tail. They determined it boasted a chestnut-brown upper surface, with a pale or white underside, a pattern known as countershading.

"We're seeing feathers still attached to the tail, and we can see how they attach, the shapes that they have down to the micrometer scale, and things like pigment patterns within the feathers," McKellar said.

McKellar said getting its tail stuck in resin "would have been a game-ender for that particular animal. They don't drop their tails like some lizards."

The tail's anatomy enabled the scientists to rule out that it belonged to a bird because it was long and flexible and lacked a pygostyle, fused vertebrae that in birds support the tail feathers. 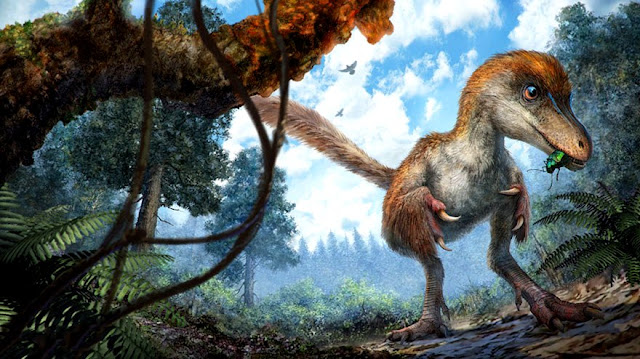 The discovery also sheds light on the evolution of feathers. The ones trapped in the amber were more primitive than those of birds, lacking much of the central shaft seen in bird feathers.

Amber has long been a boon to paleontologists. Numerous creatures have been found entombed in amber, including insects, lizards, amphibians, mammals and birds, as well as plants including flowers.


Published today in the journal Current Biology.
Share to: