Mysterious Midcontinent Rift turns out to be a geological hybrid 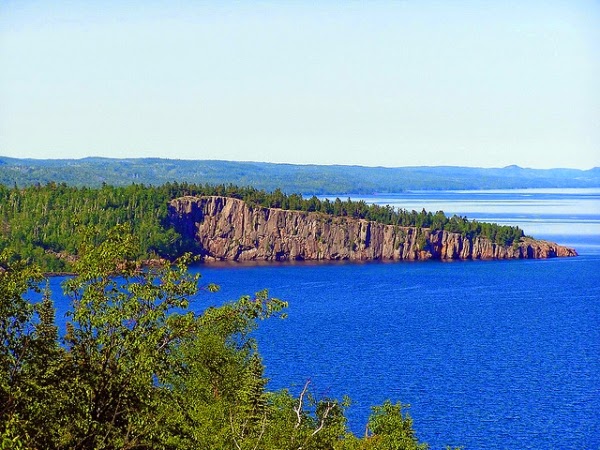 Geologists have a new explanation for how the Midwest's biggest geological feature - an ancient and giant 2,000-mile-long underground crack that starts in Lake Superior and runs south to Oklahoma and to Alabama - evolved.

They report that the 1.1 billion-year-old Midcontinent Rift is a geological hybrid, having formed in three stages: it started as an enormous narrow crack in the Earth's crust; that space then filled with an unusually large amount of volcanic rock; and, finally, the igneous rocks were forced to the surface, forming the beautiful scenery seen today in the Lake Superior area of the Upper Midwest.

The rift produced some of the Midwest's most interesting geology and scenery, but there has never been a good explanation for what caused it. Inspired by vacations to Lake Superior, Seth and Carol A. Stein, a husband-and-wife team from Northwestern and UIC, have been determined to learn more in recent years.

Their study, which utilized cutting-edge geologic software and seismic images of rock located below the Earth's surface in areas of the rift, will be presented Oct. 20 at the Geological Society of America annual meeting in Vancouver.

"The Midcontinent Rift is a very strange beast," said the study's lead author, Carol Stein, professor of Earth and Environmental Sciences at UIC. "Rifts are long, narrow cracks splitting the Earth's crust, with some volcanic rocks in them that rise to fill the cracks. Large igneous provinces, or LIPs, are huge pools of volcanic rocks poured out at the Earth's surface. The Midcontinent Rift is both of these -- like a hybrid animal."

"Geologists call it a rift because it's long and narrow," explained Seth Stein, a co-author of the study, "but it's got much more volcanic rock inside it than any other rift on a continent, so it's also a LIP. We've been wondering for a long time how this could have happened." He is the William Deering Professor of Geological Sciences at the Weinberg College of Arts and Sciences.

This question is one of those that EarthScope, a major National Science Foundation program involving geologists from across the U.S., seeks to answer. In this case, the team used images of the Earth at depth from seismic experiments across Lake Superior and EarthScope surveys of other parts of the Midcontinent Rift. The images show the rock layers at depth, much as X-ray photos show the bones in people's bodies.

In reviewing the images, the researchers found the Midcontinent Rift appeared to evolve in three stages.

"First, the rocks were pulled apart, forming a rift valley," Carol Stein said. "As the rift was pulling apart, magma flowed into the developing crack. After about 10 million years, the crack stopped growing, but more magma kept pouring out on top. Older magma layers sunk under the weight of new magma, so the hole kept deepening. Eventually the magma ran out, leaving a large igneous province -- a 20-mile-thick pile of volcanic rocks. Millions of years later, the rift got squeezed as a new supercontinent reassembled, which made the Earth's crust under the rift thicker."

To test this idea, the Steins turned to Jonas Kley, professor of geology at Germany's Gottingen University, their host during a research year in Germany sponsored by the Alexander von Humboldt Foundation.

Kley used software that allows geologic time to run backwards. "We start with the rocks as they are today," Kley explained, "and then undo movement on faults and vertical movements. It's like reconstructing a car crash. When we're done we have a picture of what happened and when. This lets us test ideas and see if they work."

Kley's analysis showed that the three-stage history made sense -- the Midcontinent Rift started as a rift and then evolved into a large igneous province. The last stage brought rocks in the Lake Superior area to the surface.

Other parts of the picture fit together nicely, the Steins said. David Hindle, also from Gottingen University, used a computer model to show that the rift's shape seen in the seismic images results from the crust bending under weight of magma.

Randy Keller, a professor and director of the Oklahoma Geological Survey, found that the weight of the dense magma filling the rift explains the stronger pull of gravity measured above the rift. He points out that these variations in the gravity field are the major evidence used to map the extent of the rift.

"It's funny," Seth Stein mused. "Carol and I have been living in Chicago for more than 30 years. We often have gone up to Lake Superior for vacations but didn't think much about the geology. It's only in the past few years that we realized there's a great story there and started working on it. There are many studies going on today, which will give more results in the next few years."

The Steins now are working with other geologists to help park rangers and teachers tell this story to the public. For example, a good way to think about how rifts work is to observe what happens if you pull both ends of a Mars candy bar: the top chocolate layer breaks, and the inside stretches.

"Sometimes people think that exciting geology only happens in places like California," Seth Stein said. "We hope results like this will encourage young Midwesterners to study geology and make even further advances."