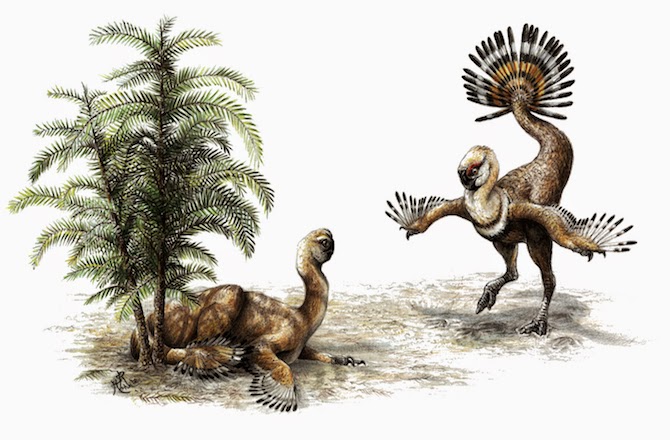 A dinosaur couple that appears to have died together after wooing each other has been identified in remains unearthed at the Gobi Desert in Mongolia.
The dino couple, named Romeo and Juliet since they are reminiscent of Shakespeare's famous doomed lovers, were entombed together for over 75 million years, according to a new study in the journal Scientific Reports.

Key to the research was figuring out the sex of the dinosaurs.

"Determining a dinosaur's gender is really hard," lead author Scott Persons said in a press release. "Because soft anatomy seldom fossilizes, a dinosaur fossil usually provides no direct evidence of whether it was a male or a female."

Persons, a paleontologist at the University of Alberta, and his team compared the remains of the bird-like dinosaurs, which were oviraptors (avian-resembling two-legged predators), with the anatomy of modern birds.

The researchers found evidence that the dinosaurs sported long feathers on the ends of their tails. The feathers were not suitable for flight, so they must have served some other purpose.

"Our theory," explained Persons, "was that these large feather-fans were used for the same purpose as the feather fans of many modern ground birds, like turkeys, peacocks, and prairie chickens: they were used to enhance courtship displays. My analysis of the tail skeletons supported this theory, because the skeletons showed adaptations for both high tail flexibility and enlarged tail musculature — both traits that would have helped an oviraptor to flaunt its tail fan in a mating dance."

Taking their analysis a step further, the research team discovered that one of the two dinosaurs had larger, specially shaped tailbones. The differences were expected, and match that of some male versus female birds today. They provide strong evidence for sexual dimorphism, meaning distinct differences in the size or appearance between the sexes of an animal.

"We discovered that, although both oviraptors were roughly the same size, the same age, and otherwise identical in all anatomical regards, 'Romeo' had larger and specially shaped tail bones," said Persons. "This indicates that it had a greater capacity for courtship displays and was likely a male."

"Juliet," other other hand, had tail bones that were shorter and simpler, suggesting a lesser capacity for "peacocking," meaning prancing around like a male peacock to flaunt one's feathers. Juliet was then a "she," according to the researchers.

As for what happened to the pair in the desert...after whatever romance may have transpired, a large sand dune suddenly collapsed on top of them, preserving the pair for near-perpetuity.

Image: Illustration of the oviraptors Romeo and Juliet, Credit: Scott Persons, University of Alberta
Share to: