Key facts about Nepal's quake and the risk of sequels 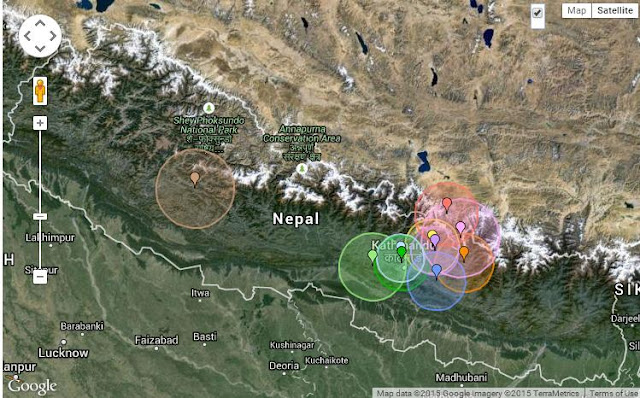 
Here are answers to some key questions about Nepal's vulnerability to quakes, the reasons for the aftershocks and what scientists are doing to assess the likelihood of another major quake.

Q: What caused the quake?

A: Nepal rests on a major faultline dividing the Indian and Eurasian tectonic plates, and collisions between these two massive regions—which created the Himalayas millions of years ago—have made it one of the world's most quake-prone countries.

The Indian plate is sliding under the Tibetan plateau, causing a build-up of stress over time.

As pressure accumulates along the interface of the two plates, it eventually exceeds capacity, leading to sharp and potentially destructive jolts such as the 7.8-magnitude quake on April 25.

Q: Are aftershocks a cause for concern?

A: While aftershocks can continue for months, even years, as the Earth adjusts to the change in stress after a massive quake occurs, low-intensity tremors are "essentially harmless", according to Roger Bilham, professor of geological science at the University of Colorado in the US.

What is worrying, however, is the fact that the April quake failed to cause a complete fracture of the Earth's surface along the fault and instead stopped short at the Kathmandu valley.

The incomplete fracture suggests that the quake did not release all the pressure that had accumulated under the Earth's surface. Geologists are concerned that the pent-up stress could result in more deadly aftershocks, like the 7.3-magnitude tremor that struck on May 12.

Q: What is the best-case scenario?

A: Although the tectonic plates must keep moving to release pressure, the movement may not be so abrupt as to cause a severe aftershock.

"What is also possible and quite likely is that the Indian plate slips and creeps slowly under the Tibetan plateau," British geologist Bilham told AFP.

Q: How can we know if this is happening?


A: Experts say the Indian plate creeping under Tibet and releasing stress—effectively continuing the process kicked off by April's quake—would cause the Kathmandu valley to move southwards.

"We already know that the Kathmandu valley moved south during the quake and since then, it's continued to move," said Rebecca Bendick, geologist and assistant professor at the University of Montana.

"We need to keep an eye on it, if the movement stops soon, we could be in trouble," Bendick told AFP.

Bilham and Bendick are part of a team of Nepalese, French, US and British researchers who have installed 25 GPS measuring instruments in the quake-hit region to track the valley's southward movement.

Q: So the same GPS unit used to plan car travel can help us understand quakes?

A: While many of us turn to GPS units to map routes for day-to-day travel, the GPS receivers used to study earthquakes are much more sophisticated.

These measuring instruments continuously record information sent via satellite signals, using it to compute their own location on the ground.

Scientists can then use this data to calculate the instruments' distance from each other and measure the extent of the Earth's movement during and after quakes.

Q: When can we expect to know more?

A: In some instances, the information will be transmitted wirelessly to servers in the US. With instruments installed high in the Himalayas with no Internet connectivity, the data must be collected in person within six months before it is over-written.

Geologist Bishal Nath Upreti, one of Nepal's leading experts on Himalayan tectonics and part of the team responsible for positioning instruments, estimates early results will emerge by October, but said it would take until December to record all the data necessary for analysis.

"We don't want to make a premature judgment...the study of earthquakes is an imperfect science since so many factors play into why a quake happens," Upreti told AFP from an outpost in central Nepal.