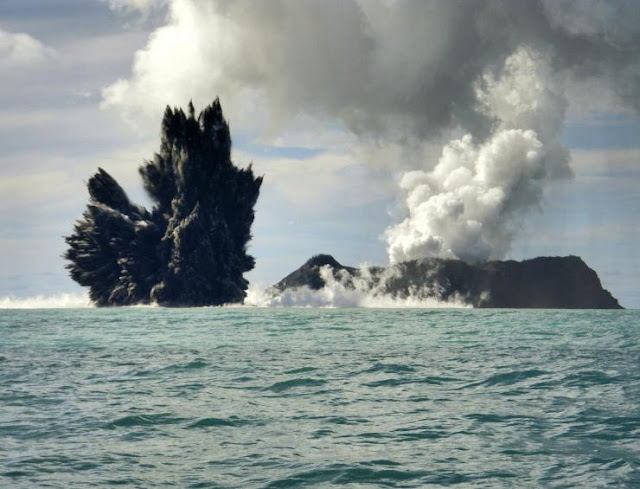 An active underwater volcano off Grenada's northern coast called Kick 'em Jenny was rumbling Thursday and regional disaster authorities were put on alert, though they said it posed no threat of triggering a destructive tsunami.

Since its discovery in the 1930s, Kick 'em Jenny has erupted beneath the surface of the Caribbean Sea at least 12 times, most recently in 2001. The volcano, which rises 1,300 meters (4,265 feet) above the seafloor on a steep slope of the Lesser Antilles ridge, hasn't caused any known deaths or injuries.

The Seismic Research Center at the University of the West Indies said seismic activity had increased in the volcano, which sits 8 kilometers (5 miles) north of Grenada. Recreational divers have reported seeing some "degassing" on the seafloor off Grenada's west coast as gas-rich magma bubbles.

Center researchers put the alert level at "orange," which means an eruption could take place within 24 hours. An eruption would stir up high waves and heat surrounding waters to boiling temperatures. Scientists say the volcano can also shoot hot rocks up through the water column.

Under the alert, all boats must stay at least 5 kilometers (3 miles) from the volcano. Kick 'em Jenny poses the greatest threat to mariners since the gases it releases can lower the density of water so significantly vessels can lose buoyancy and sink.

"There is no need to move people away from coastlines," he told reporters.

People were advised to go about their lives normally. But some were jittery as seismic activity ramped up, knocking out Internet service.

"People are just wondering what's next," said Kendel Mark, a resident of the outlying island of Carriacou.

In a 1939 eruption, Kick 'em Jenny shot a cloud of ash 270 meters (900 feet) above the sea surface. Its eruptions since then have been weaker.

by By Linda Straker And David Mcfadden