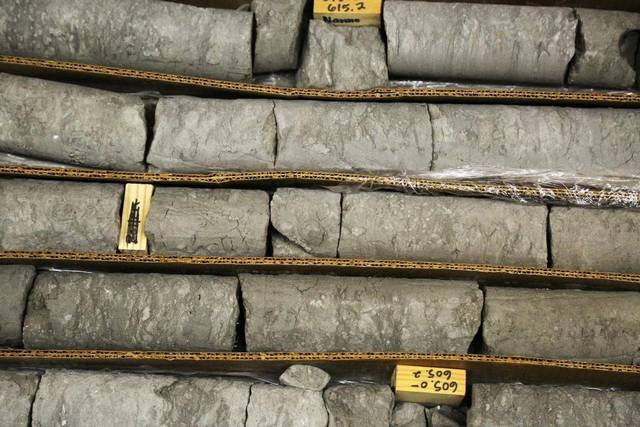 Sediment coring the bottom of the world's oceans is something that Lamont knows a lot about. Since 1947 Lamont has been actively collecting and archiving sediment from around the world. Currently our Core Repository contains sediment cores from every major ocean and sea in the world, some 18,700 cores! This is in large part due to Lamont's first director, Maurice Ewing, who instilled a philosophy of "A core a day" for all ocean research vessels. Ewing firmly believing that if we had the sediment we would be able to piece together patterns and stories about our planet, so every day at noon, or thereabouts, the ship would collect a core.

Scientists from around the world have requested slivers of mud from the cores in the repository to unlock Earth's mysteries and secrets. The cores in Lamont's Core Repository are 'no stranger' to revealing stories of Earth systems, including those of climate cycles. Almost 40 years have passed since the groundbreaking work of the CLIMAP group that used the cores to connect the start of Earth's glacial cycles to changes in eccentricity, precession and tilt. (Hayes, Imbrie and Shackleton, 1976) . Collecting sediment on this Arctic GEOTRACES cruise will help us understand more of the stories locked in the oceans.

The length of a core is dictated by the goal of the collection. Early Lamont cores were more about collecting just to gather the material because the ship was there. These early core were generally 6 to 9 meters long, although one incredibly long 28.2m core was collected from the Central Pacific! Locally cores have been collected on the Hudson River and local marshes that are closer to 1 or 2 meters in length.

For the sampling GEOTRACES is doing in the Arctic there is a specific goal of collecting just the top few dozen centimeters of sediment and the water just above it, yet at a depth of ~2200 meters. This will require a much different technique than what was used for the Central Pacific core!

The sediment in this region is soft, so the plan was to drop a small general-purpose device called a Mono-corer over the side of the ship with a few small weights on top to help drive the core tube in straight. The corer would hang below the bottom of the rosette of water samplers, far enough below that the rosette would remain 'mud-free' but still able to collect near bottom water samples. The mud in the mono-corer would be held in place by a spring-loaded door that snapped closed once the mud was inside and the tube began its return trip to the ship. All sounded good.

Although the plan was good, things don't always go perfectly. Making sure the corer actually penetrated the sediment without tipping over or over-penetrating and compressing the top sediments proved challenging, as did ensuring the sample made it back to the ship intact. After several attempts a special 'cone-of-silence' (any Get Smart fans out there?) was rigged up by the two Lamonters, Tim and Marty Fleischer, to avoid interference with the communications that were connecting with the rosette altimeter, controlling the lowering of the device. The cone was installed and the speed of the core lowering was slowed. Success! 'Houston we have mud!'

Now to unpack its secrets.