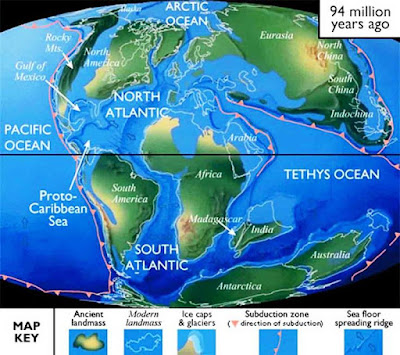 New light has been shed on the processes by which ocean water enters the solid Earth during continental breakup.
Research led by geoscientists at the University of Southampton, and published in Nature Geoscience this week, is the first to show a direct link on geological timescales between fault activity and the amount of water entering the Earth's mantle along faults.
When water and carbon is transferred from the ocean to the mantle it reacts with a dry rock called peridotite, which makes up most of the mantle beneath the crust, to form serpentinite.
Dr Gaye Bayrakci, Research Fellow in Geophysics, and Professor Tim Minshull, from Ocean and Earth Science, with colleagues at the University of Southampton and six other institutions, measured the amount of water that had entered the Earth by using sound waves to map the distribution of serpentinite.
The sound waves travel through the crust and mantle and can be detected by sensitive instruments placed on the ocean floor. The time taken for the signals to travel from an acoustic seismic source to the seafloor instruments reveals how fast sound travels in the rocks, and the amount of serpentinite present can be determined from this speed.
The four-month experiment, which involved two research ships (the R/V Marcus Langseth and the F/S Poseidon), mapped an 80 by 20 km area of seafloor west of Spain called the Deep Galicia Margin where the fault structures were formed when North America broke away from Europe about 120 million years ago.
The results showed that the amount of serpentinite formed at the bottom of each fault was directly proportional to the displacement on that fault, which in turn is closely related to the duration of fault activity.
Dr Bayracki said: "One of the aims of our survey was to explore the relationship between the faults, which we knew already were there, and the presence of serpentinite, which we also knew was there but knew little about its distribution. The link between fault activity and formation of serpentinite was something we might have hoped for but did not really expect to see so clearly.
"This implies that seawater reaches the mantle only when the faults are active and that brittle processes in the crust may ultimately control the global amount of seawater entering the solid Earth."
In other tectonic settings where serpentinite is present such as mid ocean ridges and subduction zones, the focused flow of seawater along faults provides a setting for diverse hydrothermal ecosystems where life-forms live off the chemicals stripped out of the rocks by the water as it flows into and then out of the Earth's mantle.
The researchers were able to estimate the average rate at which seawater entered the mantle through the faults at the Deep Galicia Margin and discovered that rate was comparable to those estimated for water circulation in hot rock at mid-ocean ridges, where such life-forms are more common. These results suggest that in continental rifting environment there may have been hydrothermal systems, which are known to support diverse ecosystems.
Co-Author and Professor of Geology at the University of Birmingham Tim Reston commented: "Understanding the transport of water during deformation has broad implications, ranging from hydrothermal systems to earthquake mechanics. The new results suggest a more direct link between faulting and water movements than we previously suspected."
The above post is reprinted from materials provided by University of Southampton.
Share to: