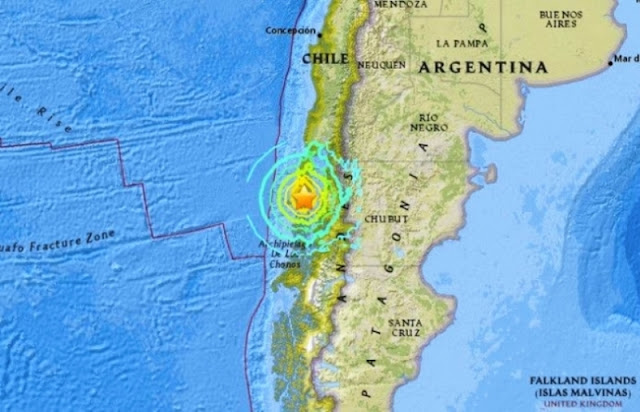 A major 7.6-magnitude earthquake hit southern Chile on Sunday, prompting thousands to evacuate coastal areas, but no fatalities or major damage were reported.

Chile’s national emergency office (Onemi) lifted both the evacuation order and a tsunami watch three hours after the Christmas Day quake struck and told nearly 5,000 people who had been evacuated they could return to their homes.

Onemi said one bridge in the area was impassible as crews worked to restore electricity to 21,000 homes without power.

Officials had issued a tsunami warning earlier for areas within 620 miles (1,000km) of the epicentre of the quake 140 miles south-west of Puerto Montt, but the warning was downgraded to a tsunami watch. Eight mostly small ports in the area were closed, Chile’s navy said.

The quake was felt on the other side of the Andes mountains in Argentina, but structural damage in areas close to the epicentre was limited, witnesses said.

“There was a lot, a lot of movement here, but besides that nothing of note, there weren’t houses falling,” said Alamiro Vera, owner of the Cabanas hotel in the southern Chile fishing town of Quellon. “It was just scary, and some things inside fell.”

A Reuters witness said some roads and at least one bridge were damaged in Quellon, on Chiloe Island, a tourist destination in Chile’s Los Lagos region.

The quake’s depth was about 20 miles, the US Geological Survey (USGS) said. According to media reports, the quake was felt in the south-west Argentinian city of Bariloche.