The Eight Most Incredible Fossils Preserved In Amber 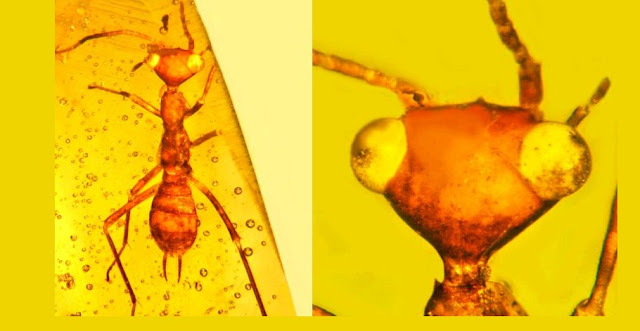 Even if fossils in amber are not useful for extracting dinosaur blood from for cloning purposes, despite what Jurassic Park may have you believe, they still preserve amazing snapshots of life millions of years ago. Amber is fossilized tree resin, a sticky, viscous substance secreted by plants in order to protect them from pests and predators. And because it is meant to protect a plant from predators, on occasion those organisms get stuck in the resin and frozen for millions of years, preserving fragile structures and unique instances of behavior paleontologists would have never seen otherwise. These are just nine example of the most incredible fossils found in amber in the last few years.


'Alien' insect in amber from 100 million years ago


Around 100 million years ago, an alien-looking insect with a bizarre head and long thin legs likely crawled around on trees in what is now Burma.

The insect is so strange that researchers say that it is not only a new species, but also belongs in its own new scientific order. Living in the time of the dinosaurs, the insect was tiny and wingless. Just two specimens of this new species exist, both of them preserved in Burmese amber.
Read about it here

Some 99 million years ago, a juvenile dinosaur got its feathery tail stuck in tree resin, a death trap for the small creature. But its misfortune is now giving scientists unique insight into feathered dinosaurs that prospered during the Cretaceous Period.

Researchers said on Thursday a chunk of amber - fossilized resin - spotted by a Chinese scientist in a market in Myitkyina, Myanmar, last year contained 1.4 inches (36 mm) of the tail of the dinosaur, complete with bones, flesh, skin and feathers. The dinosaur itself was no more than 6 inches (15 cm) long, about the size of a sparrow.
Read about it here.

Oldest arthropods ever to be preserved in amber


The Dolomite Alps of northeastern Italy have revealed plenty of droplets of amber, each between two and six millimeters in length and not that remarkable-looking on the outside. Yet an international team of researchers led by Eugenio Ragazzi and Guido Roghi from the University of Padova and by Alexander Schmidt from the University of Göttingen discovered some of the oldest ever arthropods to be caught in tree resin.


Trapped in a piece of amber, the juvenile spider appears to be on the cusp of devouring a male wasp that was caught in its web. Such a grisly scene between spider and prey has never before been found in the fossil record.

The amazing snapshot shows an event that occurred in the Early Cretaceous period, about 97 to 110 million years ago, in the Hukawng Valley of Myanmar, “almost certainly with dinosaurs wandering nearby,” as the press release about this discovery reports.
Read more at here.

Baltic Amber is also referred to as succinite, and the European variety tends to have a lighter and more yellowish tone than other varieties, such as Amber specimens from the Dominican Republic. Of course, it is the curved "Lizard" preserved inside this incredible piece of Amber that makes this a beyond belief specimen. The creature is actually likely an amphibian of a salamander variety which should make it even more of a rarity.

As inclusions are typically only found in about ten percent of Amber specimens, any rare vertebrate like this is a paleontological treasure. A group of scientists in Russia performed numerous tests in the effort to authenticate this specimen. Determining specific taxonomic details of the creature are impossible to determine without further specialized testing. Examples like this will continue to be studied and tested.
Read more it here

Salamanders are absent from the Caribbean islands today. But one block of amber from this area preserves a salamander nonetheless. Not only that, but it had just gone through a rough spot in its life before succumbing to the viscous resin. One of its legs had been bitten off by an attacking predator before falling into a resin deposit, entombing it forever since the Early Miocene.

Poinar and team, who studied the fossil, said that the salamander was an extinct Palaeoplethodon hispaniolae, a close relative of the numerous salamanders of today’s Appalachians. Even the tree from which the amber came from, is more closely related to East African trees rather than anything in the Caribbean. Thus the find may hold clues to how life on these islands evolved, with the current theory being that these little amphibians rafted onto the islands on floating logs and other forms of vegetation. All these Caribbean salamanders may have gone extinct due to climatic change, says Poinar yet again, having published the find in the journal Paleodiversity.

A rare male scorpion preserved in amber was recently uncovered in the Miocene (23-15 million year old) Chiapas amber of Mexico. Described in PLOS ONE by Francisco Riquelme and co-authors just last week, Tityus apozonalli is a new species of early scorpion closely related to other Neotropical fossil species. This specimen was discovered by a farmer in a hand-dug dirt pit.


It is actually quite uncommon for large plant pieces to be trapped in amber. That is why it was so remarkable that in 2014, Eva-Maria Sedowski and co-authors were able to find and describe some of the earliest preserved remains of a carnivorous plant in approximately 40 million year old Baltic amber. The sticky tentacles on this fossil plant resemble that of the modern plant family Roridulacea, which is currently restricted only to South Africa. This find reveals this group once had a much more widespread distribution.An Insect Caring for its Young.
Read also:
Pictures: Types of Amber
Part Spider, Part Scorpion Creature Found in Amber
This 100-Million-Year-Old Bird Trapped in Amber Is The Best We've Ever Seen 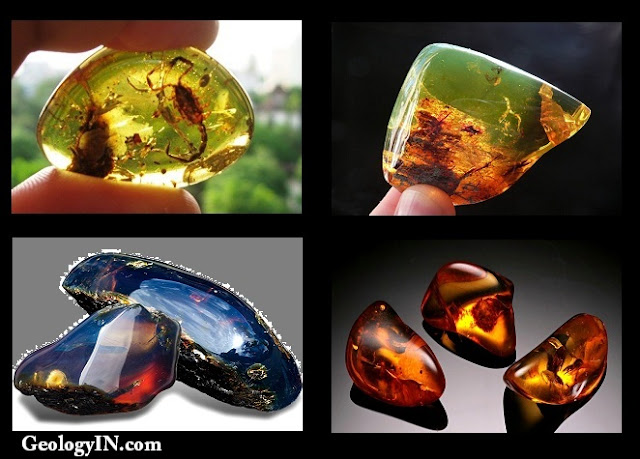