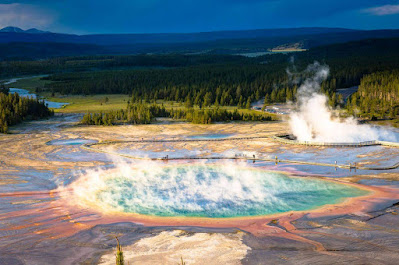 The Earth is rumbling beneath Yellowstone National Park again, with swarms of more than 1,000 earthquakes recorded in the region in July 2021, according to a new U.S. Geological Survey (USGS) report. This is the most seismic activity the park has seen in a single month since June 2017, when a swarm of more than 1,100 rattled the area, the report said.

Fortunately, these earthquakes were minor ones, with only four temblors measuring in the magnitude-3 range (strong enough to be felt, but unlikely to cause any damage) — and none of the quakes signal that the supervolcano underneath the park is likely to blow, park seismologists said.

"While above average, this level of seismicity is not unprecedented, and it does not reflect magmatic activity," according to the USGS report. "If magmatic activity were the cause of the quakes, we would expect to see other indicators, like changes in deformation style or thermal/gas emissions, but no such variations were detected."

Throughout July 2021, the University of Utah Seismograph Stations, which are responsible for monitoring and analyzing quakes in the Yellowstone park region, recorded a total of 1,008 earthquakes in the area.

These quakes came in a series of seven swarms, with the most energetic event occurring on July 16. According to the USGS, at least 764 quakes rattled the ground deep below Yellowstone Lake that day, including a magnitude-3.6 earthquake — the single largest of the month.

The month's remaining six swarms were all smaller, including between 12 and 40 earthquakes apiece, all measuring below magnitude 3, the report said.

These quakes are nothing to worry about, the USGS added, noting that the earth-shaking is likely the result of motion on preexisting faults below the park. Fault movements can be stimulated by melting snow, which increases the amount of groundwater seeping under the park and increases pressure levels underground, the researchers said.

Yellowstone is one of the most seismically active regions in the U.S.; the area is typically hit by anywhere from 700 to 3,000 earthquakes a year, most of which are imperceptible to visitors, according to the National Park Service. The biggest quake on record in Yellowstone was the magnitude-7.3 Hebgen Lake quake, in 1959.

Why so shaky? The park sits atop a network of fault lines associated with an enormous volcano buried deep beneath the ground (this volcano last erupted about 70,000 years ago, according to the USGS). Earthquakes occur as the region's fault lines stretch apart, and as magma, water and gas move beneath the surface. These features also feed the park's reliable geysers and steamy hot springs.

The Yellowstone volcano has erupted several times in the past, with gargantuan eruptions occurring every 725,000 years or so. If this schedule is accurate, the park is due for another big eruption in about 100,000 years. Such an eruption would devastate the entire United States, clogging rivers with ash across the continent and causing widespread drought and famine.