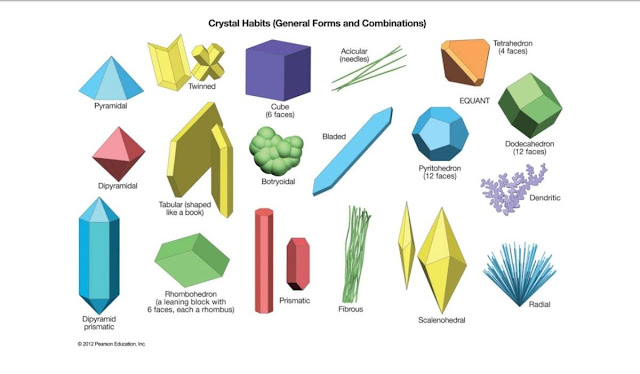 The terminology used to describe crystal habit is not intended to replace the precise nomenclature of crystallography. Instead, it is intended as a supplement to this system.

Discussions of crystal habit are more descriptive than precise; for this reason the terminology is suited to the discussion of mineral samples discovered in the field. Naturally formed specimens are rarely quantitatively perfect.

Although each mineral species typically forms according to a few preferred shapes, crystal habit is largely determined by the environmental conditions under which a crystal develops. For example, aqueous solutions near or surrounding a crystal contain the elemental substances which it needs to continue growth.

The direction from which a growing crystal may obtain such solutions is a factor which will affect its eventual shape. Higher environmental temperatures during formation increase ion mobility and aid in crystal formation; the rate at which the environment cools determines how much time a mineral is allowed to form large crystals. The amount of space available for a crystal to fill affects its final shape and size.

Surface energy relations are also quite important to the direction of crystal growth; this process is not yet fully understood.

Adjectives used to describe the habit of individual crystals are 'equant,' 'prismatic,' and 'tabular.' Aggregates of crystals may also be termed equant or prismatic, while aggregates of thin, flat, tabular crystals may be 'bladed.' Thin sheets, flakes or scales are termed 'foliated,' 'micaceous,' and, if feathery or delicate, 'lamellar' or 'plumose.'

Crystal aggregates resembling long, slender needles, hair, or thread are termed 'acicular,' filiform,' 'capillary,' or 'fibrous.' An aggregate of crystals forming a network or lattice is 'reticulated;' one composed of branches which radiate starlike from a central point is 'stellated' while a branching and treelike mineral growth is 'dendritic.'

Tapered, column-like formations are 'stalactitic' or 'columnar' while concentrically banded formations are of 'concretionary' habit. Minerals whose flat crystal faces are covered with shallow, parallel grooves are 'striated;' a fine furry layer of crystals growing over a massive lump constitutes a formation of 'drusy' habit.

Equant
A crystal which is equant or equidimensional possesses approximately the same side length in every direction. Crystals of garnet are often of equant habit.


Prismatic
A prismatic crystal is elongated in one direction like a prism. The mineral tourmaline often forms crystals of such habit.

Micaceous
Minerals of micaceous habit form as thin, flat sheets or flakes which are easily peeled or split off the larger mass. Muscovite provides an example of micaceous habit. Crystals of foliated habit are separable into leafy structures or display leaflike projections.


Hopper
A hopper crystal is a form of crystal, defined by its "hoppered" shape. The edges of hoppered crystals are fully developed, but the interior spaces are not filled in. This results in what appears to be a hollowed out step lattice formation, as if someone had removed interior sections of the individual crystals. In fact, the "removed" sections never filled in, because the crystal was growing so rapidly that there was not enough time (or material) to fill in the gaps.


Acicular
The adjective 'acicular' means needlelike in shape. An acicular aggregate of crystals contains many long, slender crystals which may radiate out like needles or bristles from a common base. Acicular crystals are typically long and narrow like a pine leaf and seem to possess a sharp point. The mineral natrolite often exhibits acicular crystals.


Filiform
A mineral possessing crystals of filliform habit exhibits many hairlike or threadlike filaments. "Filiform' is derived from the Latin word filum, 'thread.'


Fibrous
Specimens possessing fibrous habit exhibit clumps of sinewy, stringy, or hairlike fibers.
Reticulated
A mineral specimen of reticulated habit seems to display a lattice, net, or network of small crystals. The word 'reticulated' is derived from the Latin term rete, or 'net.'

Stellated
A mineral of stellated habit possesses several branches which radiate outwards from the center in a pattern resembling a star. The word 'stellated' stems from the Latin term stella, or 'star.'

Dendritic
Dendritic crystals form a divergent branching structure reminiscent of an arborescent, organic growth such as a tree or a dendrite. Native copper sometimes exhibits this habit.

Reniform
Reniform crystal habit displays the shape of a kidney. The mineral species hematite provides samples which exemplify both mammillary and reniform habit. 'Reniform' is derived from the Latin renes, 'kidney.'

Pisolitic
A mineral of pisolitic habit develops round, pea-shaped forms. These are larger and slightly more uneven than an oolite and are usually composed of calcium carbonate. The word 'pisolitic' is derived from the Greek term pisos, 'pea.'


Stalactitic
Stalactitic or columnar crystal habit refers to the tall, tapered, columlike appearance of an icicle or a limestone stalactite. Such formations are built up by the dripping of mineral-laden solution. The minerals calcite and aragonite (CaCO3) typically form stalactites. The term is derived from the Greek word stalaktos, 'dripping.'

Concretionary
A concretion develops when mineral matter is concentrically deposited around a nucleus and colored and banded layers are build up. Malachite often exhibits such formations.

Massive
Massive or earthy habit describes a large, lumpy mass which has no apparent crystal form. In such a sample the crystals are too tiny to be observable by the eye and are interlocked and mingled; the specimen lacks visible crystals.


See also:
Crystal Formations and Their Meanings
Types of Mineral Inclusions with Photos
The World's 10 Most Deadly Minerals
Top Radioactive Minerals: Occurrence and Identification
Share to: